We get an exclusive look behind the wheel of Vauxhall's Paris show star - the GTC concept previews the new Astra VXR - so what's it like up close? 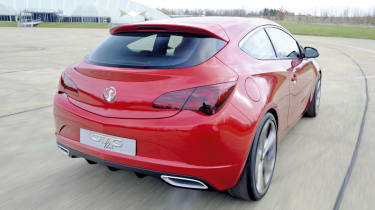 The GTC takes the concept of the Astra Sport Hatch to a different, better-looking and more exciting level. Vauxhall sources tell us the new three-door range will cost about the same as before – so the entry-level 1.4-litre petrol three-door is anticipated to start at around £14,000. But the firebreathing VXR hot hatch is clearly the most exciting version, and if it carries over the visual drama of the GTC Paris, it’s certain to prove a hit with its styling alone.

No longer are three-door hatchbacks a simple rehash of their five-door siblings. Brands such as Vauxhall are investing heavily to try to make their small family cars appeal to buyers wanting a dash of sporty style. And to highlight how different the new three-door Astra will be, it will even get a new name – so it’s goodbye Sport Hatch, hello GTC.
The model doesn’t only show the look of the three-door; it also hints at the forthcoming high-performance VXR. It’s already been previewed in the form of the Astra GTC Paris concept, which debuted at the French capital’s motor show last autumn – and now we’ve got behind the wheel.
Away from the stands, first impressions of the car are good. The muscular body is emphasised by bulbous arches and Insignia-style ‘blades’, which enhance the broad shoulder line. The slim, eagle-eye headlamps, trapezoidal grille and LED daytime running lights are imposing, and the coupé-like shape is more in the vein of Renault’s Mégane Coupé than the previous Sport Hatch.
Although the GTC is a concept, the cabin is clearly more than just a styling exercise. It’s fully functioning, and features sports seats from the Insignia VXR – in red with black trim for the driver and black with red trim for the front passenger. The leather-clad steering wheel features metal inserts, and the blades from the flanks are repeated inside, as a reminder of the car’s potential.
What’s more, the door shuts with a hefty clunk, and there’s none of the rattles and pretend instrument graphics of most concepts. Turn the key and the direct-injection 2.0-litre petrol turbo throbs into life. Vauxhall says the showroom VXR will rival the Ford Focus RS with around 300bhp, reined in by an electronic limited-slip diff.
We weren’t able to push this priceless concept hard to rate the set-up’s effectiveness, but the engine felt urgent, and the GTC’s regular six-speed gearbox provided fluid and precise changes. What’s more, the FlexRide adaptive damping system ensured the hatch absorbed bumps well, and it felt agile through corners.
Will the newcomer tempt buyers from the hot Focus when it goes on sale? We’ll have to reserve judgement until we can drive a production version. But the GTC Paris’s deep side skirts, gaping front grille and monster 21-inch alloys certainly provide the necessary visual muscle.
The three-door won’t be sold only as a hot model, either. There will be versions to suit all budgets, offering all the same engines as the five-door – starting with an entry-level 1.4-litre petrol. It has room in the back for three, plus a decent-sized boot, and gives small hatch fans something striking, without the need to compromise.
Rival: Mégane RS250
Renaultsport model starts at £24,650, and is the performance flagship of the Mégane three-door range. It combines good looks with fun handling, and is a real contender in this class.
Share this on TwitterShare this on FacebookEmail