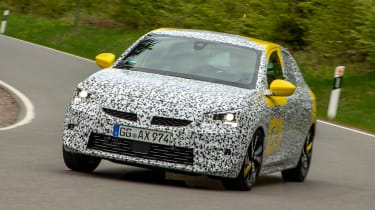 The Vauxhall Corsa was drastically in need of an overhaul and the early signs of this new sixth-generation car shows the partnership with Peugeot-Citroen is starting to bear fruit. But the Corsa doesn’t feel ground breaking, rather that it’s been thoroughly reimagined to the point that it’ll now at least be competitive with the best in the class. Even though competition the supermini sector is incredibly tight, that’s a win in itself.

The launch of a new Corsa is about as big as it gets for Vauxhall. Britain loves superminis and the Corsa is a perennial fixture on the best-sellers list, even though the current model can trace its roots all the way back to 2006.

This means it’s way past time for an all-new Corsa, something that was kick-started around two years ago when Peugeot-Citroen orchestrated a buyout of Vauxhall and its European sister Opel from parent company General Motors.

This sixth-generation of the famous nameplate (although we knew the original as the Nova, it was called the Corsa in Europe) is based on Peugeot-Citroen’s CMP Common Modular Platform, sometimes also referred to as EMP1. This has made many new technologies and components available to the British brand, with headline stats such as a massive 108kg weight saving – around 10 per cent – compared with its predecessor depending on spec. 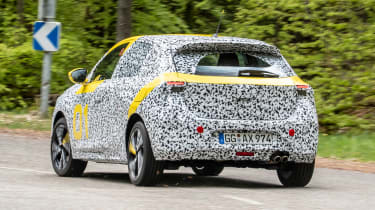 That comes courtesy of three-cylinder engines that are around 15kg lighter than the four-cylinder units in the outgoing car, a 2.4kg lighter aluminium bonnet, 10kg from the front and rear seats combined and a massive 40kg reduction in the body, which is also 15 per cent stiffer. The lightest version tips the scales at just 980kg.

Weight saving has a massive affect on performance, handling and comfort, and efficiency, so it’s no surprise the Corsa has improved on all fronts. In fact, all powertrain combinations in the new Corsa are more efficient than the most eco-focused model of the outgoing car.

From launch the most popular powertrain is likely to be the 99bhp 1.0-litre three-cylinder turbo petrol with a six-speed manual, although we also tried the brand’s new eight-speed automatic with a 128bhp version of the same engine that hasn’t yet been confirmed for the UK. A 99bhp 1.5-litre diesel manual will also feature. 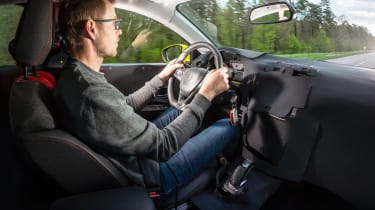 The petrol turbo engine is refined, smooth and delivers its grunt in a torquey dollop at low to mid revs, thrumming along with a relaxed gait that’s only punctuated by shifts with the manual box. Some Peugeot-Citroen sourced transmissions aren’t the sweetest, but this six-speed unit’s change never proved an issue. It’s not involving, but it’s not obstructive either.

We also tried the eight-speed automatic and found it easy-going. It’s not the quickest to shift but it’s smooth and should suit most buyers after this type of tech just fine.

Both will share the same chassis and set-up, and while there were different tweaks to the roughly 80 per cent complete test cars we tried in order to settle on the final calibration, the overriding sense was of a mostly compliant car with light, quick steering that felt refined and fairly comfortable.

Both cars exhibited the same slightly lumpy trait to the low-speed ride in town, but the damping smoothed out as the speed increased. Here the Corsa floats over the surface better with a smoother, more languid reaction to all but the very worst bumps and ripples.

That light steering gives the Vauxhall a sense of agility, partly thanks to a new calibration and remounting of the power steering motor on the rack rather than the column.

The platform can back this up thanks to its improved damping, 28mm longer wheelbase (despite a similar overall length) and 48mm lower roofline without really compromising headroom. Combined, these lower the centre of gravity noticeably, so the Corsa rolls a lot less than its predecessor. 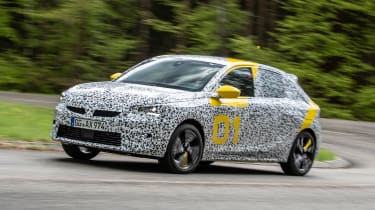 Although the chassis is now lighter it’s been optimised with strengthening in strategic areas to make it more responsive, while reducing the overhangs with that longer wheelbase also means it’s now more practical.

There’s 24 litres more boot space than before, at 309 litres in total, while the void is 78mm wider across the wheel arches. The Corsa will be five-door-only so access to the rear is easy, and there’s acceptable legroom back there – but then the majority of the current crop of superminis are also spacious.

The clever thinking continues with aero cladding underneath to improve refinement further and an active aero shutter at the front to reduce drag and boost efficiency. There’ll be two different spoilers too, a bigger one on sportier models and a smaller lip on normal grades to retain high-speed stability, according to the engineering team.

All of these innovations will of course benefit the all-electric Corsa-e that’ll compliment the combustion-engined cars, as the CMP platform has been engineered to accommodate a full battery-electric model, with a 50kWh battery for an official range of 211 miles. With 134bhp it should have decent performance too.