With excellent style and performance, the new flagship Corsa is the best VXR yet 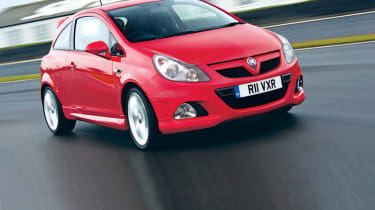 The new flagship Corsa is the best VXR yet. With a highly capable chassis even in standard form, Vauxhall says its handling is better than that of the Astra, and we agree. Performance from the 1.6-litre engine is strong, if a bit manic when cornering, and the fuel economy figure is impressive. While the Corsa can’t match the Clio 197’s finesse, it’s cheaper and offers greater scope for owners keen on customising and modifying their hot hatch.

Raw, raucous and racy. Vauxhall’s VXR models are all of these. But how will the formula that made the hottest ever Astra a firm favourite among keen drivers work when it’s applied to the new Corsa supermini?

There’s no doubt the latest Corsa will turn heads, as the VXR model is striking from every angle. With more scoops and vents than any rival, it is unashamedly bold. However, it’s not all for show, as the bodywork was developed in a wind tunnel and the neat rear diffuser really does improve high-speed stability. Large alloys, plus a high-level roof spoiler and distinctive VXR branding leave you in no doubt as to the origin of the car. In fact, Vauxhall is fast creating an immediately recognisable look for its hottest models, something no other manufacturer can match.

Inside, the most significant changes are the Recaro seats. They are the very latest design, and offer great comfort and support, while still allowing for side airbags to be fitted.

Start the engine and there is a rasp from the exhaust, while blipping the throttle sends the rev counter spinning freely. Developing 189bhp, the turbocharged 1.6-litre engine was first used in the Meriva VXR, and here it gives the Corsa an impressive turn of speed. Vauxhall claims a 0-60mph time of 6.8 seconds, and with the turbo kicking in from low revs and an overboost giving extra pulling power under full throttle, it never feels slow.

The newcomer also proves refined. In-gear acceleration is smooth and, at cruising speed, the Corsa is a capable long-distance companion. It’s less frenetic than its naturally aspirated Renaultsport Clio 197 rival which saves its acceleration for a manic, high-revving peak, rather than spreading it throughout the range.

The Corsa’s gearbox is a bit disappointing, though, and the large gearlever does little to help the already laborious shifts. The variable assistance electric power-steering will also leave keen motorists wanting more feedback, particularly in the straight-ahead position.

However, on the road the car still impresses. A hot hatch proves its mettle when cornering, and this VXR benefits from having been part of the new Corsa design and development plan from the very start.

Riding 12mm lower at the front and 19mm at the rear than the standard model, it also has different suspension settings and a 25 per cent stiffer torsion-beam rear axle.

As a result, the VXR can tackle tight corners confidently. It doesn’t turn into bends with quite the same verve as the Ford Fiesta ST, but few will be disappointed by the involving chassis. The trouble is, the highly capable standard-fit stability control works overtime trying to get all that performance on to the tarmac.

It can be turned off, but do this and you’ll soon be on first-name terms with your local tyre fitter. Exiting corners at any more than half throttle sees the power spinning uselessly away through smoking rubber.

Even though it’s not quite as polished as its Renault rival in pure handling terms, the VXR is easier on the wallet. At £15,595, it undercuts its rival by £400 – and has more standard kit.

Vauxhall expects there to be a high take-up of extras, including the £400 upgrade to 18-inch wheels. Yet despite its performance, looks and credentials, the VXR is a sound financial proposition – with 35.8mpg fuel economy helping to keep running costs down. Only 2,500 will be sold here annually, which will boost residuals, too. While it’s unlikely to be the top choice for those wanting pure hot hatch handling, the Corsa VXR is enjoyably raw and offers surprisingly good value.