225bhp pocket rocket is most powerful model in its class, making it one of the UK's hottest hatches 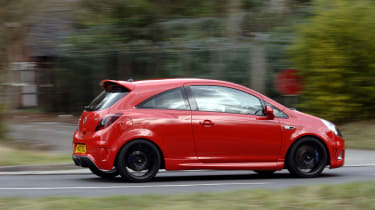 First opinionIn an effort to build the brand’s credibility, Vauxhall’s stunningly powerful VXR 888 manages to set several class benchmarks for performance and drama. We can think of few other superminis with such a strong character, but while the Corsa has massesof brash appeal, it lacks the subtle road manners of sweet-handling rivals such as the ST185.

It’s tough for car makers to launch a performance car brand. If you don’t believe us, just ask Vauxhall. While the firm might not admit it, the introduction of its VXR badge has been anything but plain sailing.

Despite pouring millions of pounds into winning the British Touring Car Championship with the 2007 Vectra, and developing one of the most comprehensive ranges of performance cars available, the VXR logo still doesn’t have the impact of its rivals.

Badges such as Volkswagen’s GTI, Ford’s RS and ST and even Subaru’s STI still have greater reach. But hats off to Vauxhall, because the firm has vowed it’s not going to give up the battle just yet. And the Corsa VXR 888 is the next step as it attempts to establish itself as a major force.

Developed purely to help bolster the credibility of the brand, the model’s specification reads like a boy racer’s Christmas wish list. With a tuned engine pumping out an astonishing 225bhp, the Corsa is easily the most powerful model available in the class.

And this is no wolf in sheep’s clothing. Vauxhall hasn’t missed a single opportunity to trumpet its supermini’s giant-killing pace. There are black alloy wheels wrapped in low-profile tyres with crazy tread patterns. Blue brake calipers grip grooved brake discs, while further up, the bodywork is adorned with wings and air vents.

The lowered suspension puts it close to the tarmac, but the Flame Red paintwork, which offers a dramatic contrast to the black wheels, ensures the car looks as if it’s riding even closer to the ground.

Inside, new bucket seats are the biggest change to the standard VXR’s already neat and stylish cabin. The driving position offers plenty of adjustability, and the chairs are very comfortable – despite their extreme design. Twist the ignition key, and the final piece of the 888’s package of enhancements makes its presence felt.

A new exhaust system, designed by specialist firm Remus, is certainly louder than standard, but at low revs its note is menacing, rather than unpleasantly noisy. Head out on to the road, and the newcomer lives up to its billing as one of the most extreme road cars Vauxhall has built.

Its looks certainly turn heads, but it’s that exhaust note that really grabs people’s attention. From 4,000rpm, its purposeful growl turns into a roar, punctuated only by a rally car-style crackle on gearchanges.

Power delivery is best described as sudden. Floor the throttle, and in truth not much happens, but once the turbo picks up, lag gives way to an avalanche of torque, all of which seems to arrive at around 3,000rpm.

However, despite the firecracker exhaust note and uneven delivery, the car’s road manners are not quite as wild as you might imagine. Although the ride is firm, it’s not harsh, and even though the huge power is fed through the front wheels, there’s nowhere near as much torque steer as you would probably expect. The handling is light but accurate, and the VXR 888 has the busy, restless feel of a race car, although this means you have to concentrate to keep it in a straight line.

Once tucked into corners, though, the model offers an impressive amount of grip. However, careless use of the throttle quickly introduces a large amount of understeer, and the Corsa will skate across the tarmac as the wheels spin the power away.

Fortunately, a quick-acting traction control system steps in before the VXR has a chance to behave too wildly. The uprated brakes are extremely reassuring, too. The all-disc set-up is very powerful and resists fade – even under hard use. But the big question is, will all of this be enough to guarantee the VXR a place in the hearts of the most demanding enthusiasts?

There’s no doubt that the VXR 888 serves up considerable thrills on the road, but its brash looks might be too much for some tastes. And while its driving experience is rewarding, it doesn’t quite have the measure of the excellent Ford Fiesta ST185.

Nevertheless, when it comes to straight-line performance, there’s little that can touch the hot Corsa, and for that alone it really should be recognised as the spectacular performance car it undoubtedly is. The elite club of the UK’s hottest hatches has just found itself a new member...

Rival: FORD FIESTA ST185 The Fiesta is due to be replaced, but the Mountune-prepared ST185 demonstrates why Ford has a great reputation for building hot hatches. Race-spec suspension offers fantastic grip and a new exhaust boosts power, yet because the updates are official, the ST’s warranty remains intact.