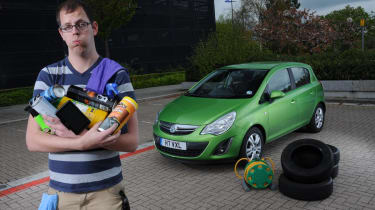 6
As products writer, I’ve often got a new wheel cleaner or hi-tech hands-free kit stashed somewhere in the cabin of our Corsa. This was rammed home to me recently as I was emptying the supermini in preparation for its departure from our fleet after a year’s faithful service.
I discovered de-icers in the door bins, sat-navs in the seat pockets and an atlas in the glovebox, as well as a few microfibre cloths hidden in various cubbies. Yet a couple of hours’ hard work soon had the well built interior and the car’s £495 optional Lime Green paintwork looking factory fresh again.
Before it could leave our fleet, though, the Corsa needed its first service – it’s done over 17,000 miles. I dropped the car at Evans Halshaw in Hemel Hempstead, Herts, at 8.30am, and it was ready by 12pm.
The only advisory on the service sheet was that the front brake pads were 80 per cent worn, so would soon need replacing, at a cost of £99. While the car was in the garage, I also asked for the Continental EcoContact tyres to be put back on, as the Continental WinterContacts aren’t as effective in the warmer spring weather. The final bill was £246.12 – not cheap for a supermini’s first service, but the Vauxhall instantly felt better.

Not that I got much chance to enjoy the car’s sharper feel, as I left it in the office car park and took the keys to a Chevrolet Orlando for a skiing holiday in Chamonix, France. As practical as the Corsa is for a small car, I was travelling with five other people and all their luggage, so the seven-seater Chevy was called into action.
After my week away it was a surprising pleasure to get back behind the wheel of the Vauxhall, though, because getting the summer tyres refitted has added some finesse to the handling. Yet despite the neat cornering ability and compact dimensions, I still managed to kerb one of the stylish alloy wheels when taking evasive action to avoid a speeding BMW.
Fortunately, specialist Stan Monk from Alloy Innovations in Cambridge came to the rescue – he was able to repair the nasty scrape in an hour for £54. As a result, the Corsa looked as good as new when we handed the keys back.
Over the past 12 months, the car has proven versatile and reliable. It did a fine impression of a removal van when I moved house, with its 285-litre boot expanding to 1,100 litres when the seats are folded. My Border Terrier also has plenty of space to stretch out in, plus the car has coped well on long motorway journeys.
It hasn’t been perfect, though. While there’s no arguing with the 1.3-litre engine’s efficiency and decent mid-range punch, its refinement has left a lot to be desired.
It’s gruff and vocal regardless of speed, plus it sends tingling vibrations through the steering wheel, pedals and gearlever. Futher damaging the Corsa’s credentials as a comfortable cruiser has been its poor ride. It thumps into potholes and can’t maintain its composure over bigger bumps.
Yet while there are better superminis on the market – like the Ford Fiesta and Kia Rio – I’ve enjoyed my time with the Corsa and am sad to see it go. It’s a reliable, solidly built and surprisingly practical small car.

“I was disappointed by the Corsa. Not only did I not get near the 78.5mpg Vauxhall claims, but the 1.3 CDTI isn’t as smooth and quiet as rival diesels.”Mat Watson, Head of motoring video

“It’s nice to see the Corsa has matured into an eco car. When I was growing up, they were always the most ‘modified’ cars in the local McDonald’s car park.”Mark_Wyatt, via Twitter