Looking for a nifty run around that packs a punch when it comes to image? A Vauxhall Corsa could be the answer 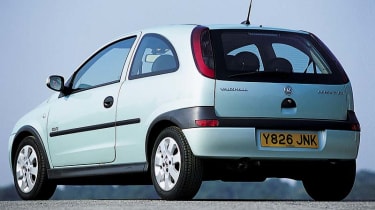 There's no denying the phenomenal success of Vauxhall's Corsa. Keen pricing, good build quality and a youthful image mean it's a strong seller. And the model's hardy mechanicals make it a fine used buy - particularly with prices starting from as little as £3,000.

The Corsa is a spacious supermini that aims to offer the refinement and composure of its bigger brother, the Astra. Easily the most popular engine is the 1.2-litre petrol, which is economical, refined and sprightly, while the 1.4 unit impresses, too. The 1.7-litre DI and DTI diesels are average, but the newer 1.3-litre CDTI is excellent, although it commands a hefty price premium.

No Corsa is lavishly equipped, but the most popular SXi has electric windows and remote central locking. The car is also cheap to insure and is a good tip for easy sale in the future.

The Corsa has a smart dashboard, and the firm, sporty seats in SXi and SRi models are great. A notchy, slack gearbox and slightly vague steering detract from its appeal, but the 1.2-litre and 1.4-litre engines are commendable.

There's a real difference between standard cars and the SXi and SRi. All ride firmly and cruise well, but the sportier models corner with real gusto, displaying minimal roll and lots of grip.

The supermini sector remains the most active at present, and the Corsa is among those cars that is sought after. It features on most daily rental fleets, which means there is a steady supply of used examples available on the market. 'Design' editions are desirable thanks to their high spec compared to entry-level models. The 1.3-litre CDTI diesels are particularly popular at the moment, but dealer stocks are low, which doesn't allow much room for healthy haggling over the price.Jeff Paterson, senior editor, Glass's Guide

Life with a Corsa

I run a Corsa 1.0, because it was cheap to buy and promised excellent fuel economy - but if I bought another, I'd want a better specification. It's too plain inside and the engine feels gutless.Jo Baker, Consett, Co Durham

I bought my Corsa as it's one of the least girlie-looking superminis, especially in black. It's a 1.2 and I find it surprisingly quick.Dan Richards, Stevenage, Herts

Despite the success of the previous Corsa, it never cut it against the competition in the area of driver appeal. The new model addresses this, and is class-competitive. While the styling isn't a radical departure, the latest Corsa sits on a new platform, so it offers more space and is stronger and safer. The ride and handling impress, as do the range of engines. Buyers get a thoroughly competent and enjoyable drive in an all-round package that's hard to beat.