The Vauxhall Corsa SRi might look sporty, but the small engines appeal when it comes to insurance premiums 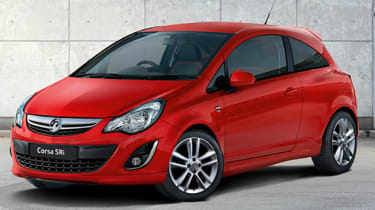 The Vauxhall Corsa is a staple of the supermini sector, and has been popular with buyers ever since it was launched in 2006. It’s offered in three and five-door guises, while the sheer variety of engines and trim levels on offer mean there should be a Corsa to suit your needs. Sitting near the top of the range is SRi trim. This is a sporty variant, because it comes with sports suspension, 17-inch alloys and a sporty bodykit.

While it looks sporty, the engine range means the Corsa SRi is more insurance friendly than the flagship Corsa VXR hot hatchback. There are currently two engine options with the SRi – a 98bhp 1.4 VVT and Vauxhall’s newer 128bhp 1.4 turbo petrol.

The Corsa has an eye-catching design, and the SRi version is marked out by its sports bodykit, black headlamp housings, tinted windows and alloy wheels. It also has lowered sports suspension, while sports seats add a touch of style to the interior. It’s offered in three and five-door guises, and it looks reasonably fresh thanks to its swept back headlamps, rakish nose and neat detailing.

As a five door, the Vauxhall Corsa looks a bit square, while the three-door is smarter thanks to its rakish roofline and steeply angled tailgate. Standard kit on SRi models includes a leather multifunction steering wheel, cruise control, tyre pressure monitors and air-conditioning.

The Vauxhall Corsa really shows its age when it comes to driving as a result of its lifeless steering, slow responses and average front-end grip. The lacklustre dynamics are further hampered on SRi models by a ride that’s neither firm enough to be sporty nor supple enough to be comfortable.

The 98bhp 1.4 petrol isn’t very powerful, which is a bonus for low insurance costs, but the 128bhp 1.4 turbo has decent mid-range power and is a sprightly performer compared to rivals such as the Ford Fiesta Zetec S and SEAT Ibiza FR. Thankfully, the Corsa offers a comfortable driving position, light controls and compact dimensions, which ensure it’s a stress-free urban runabout.

Like all Corsas, buy an SRi model from new and you can benefit from a unique warranty that lasts the lifetime of the car, or up to 100,000 miles. Practicality is one of the Vauxhall Corsa's trump cards, and it's one of the most spacious cars in the supermini class.

Opening the tailgate reveals a usefully low loading lip and a 285 litre boot. When the rear bench is folded, that increases to 1,100 litres, or 1,050 litres in the three-door. A false boot floor provides extra flexibility, so it’s a shame it’s only available as an option on higher specification versions. As is the clever bicycle rack, that slides out from behind the rear number plate at the touch of a button. There is a decent amount of head and legroom for rear seat passengers, though, and the cabin is packed with useful storage

In terms of economy, the petrol engines in the SRi aren’t the best, although because it’s a newer engine, the 1.4 turbo has the same emissions and claimed economy figures as the standard 1.4. Both claim 51.4mpg on the combined cycle, with emissions of 129g/km. That’s because the 1.4T comes with stop-start as standard, while the 1.4 goes without.

Long 20,000-mile service intervals keep dealer visits to a minimum, and Vauxhall service costs are reasonable. The Corsa is expensive and relatively poorly equipped, although Vauxhall dealers are open to discounts, especially as there’s an all-new model coming later in 2014.