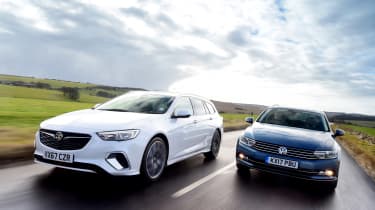 Vauxhall has delivered a blast from the past, dusting off its GSi badge 25 years after it first appeared on a Corsa and applying it to its Insignia Grand Sport family hatch and Insignia Sports Tourer estate. It’s the latter model we’re testing here in 2.0-litre turbodiesel form, although a 2.0-litre turbo petrol will be available later this year.

In standard guise the Insignia has won praise for its affordability, space and practicality, but in the transformation to this hotter GSi version, the price has been hiked significantly to the point where it’s more expensive than its rival in this test. So does the Vauxhall make sense with more power, or is the cheaper Volkswagen Passat a better bet? 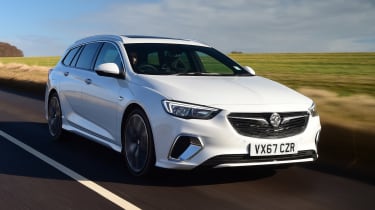 For: Strong engine, lots of connectivity and safety kit, four-wheel-drive traction.Against: Firm ride, pricey, not as much luggage space as in the Passat

This new GSi isn’t exactly a like-for-like replacement for the old Insignia VXR, but it’s currently the most potent version of Vauxhall’s versatile family vehicle, and the brand has gone to great lengths in reworking the model to deliver more engaging handling.

That means the car gets a ‘Sports chassis’ set-up with a 10mm lower ride height, as well as FlexRide adaptive dampers with a Competition mode as standard. However, even in the more comfortable Tour setting, riding on large 20-inch alloys, the GSi is firm. It crashes into bumps and is more unsettled on poorly surfaced roads, plus you feel that sitting in the sports bucket seats as you’re moved up and down more abruptly than in the Passat. Competition mode means these traits are even more obvious, so Tour is a better balance most of the time. 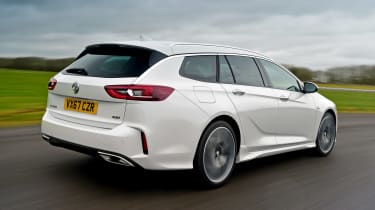 While the Vauxhall’s extra focus erodes some long-distance cruising comfort, it at least means the Insignia handles fairly well. The GSi-specific steering tune has a nice weight, but isn’t quite as direct as the VW’s. There’s a good level of grip to call on, and the firmer set-up means there’s stability to match in corners. But this is shattered by a mid-corner bump, because the Insignia occasionally feels brittle when contending with imperfections in the road.

The engine is punchy enough, and 0-62mph takes 7.4 seconds. Yet the car is 226kg heavier than the Passat, at 1,807kg, so although the 480Nm of torque produced from low down at just 1,500rpm is strong and gives plenty of flexibility, it’s not quite as quick as you’d expect.

This is hampered further by the more sluggish eight-speed automatic gearbox when compared with the VW’s sharper DSG unit. While it shifts smoothly enough most of the time, taking manual control using the steering wheel paddles doesn’t result in the same crisp shifts or sense of satisfaction as in the VW. 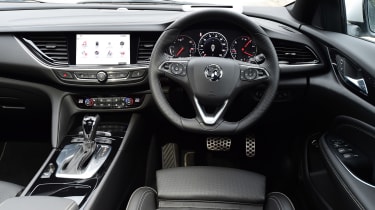 The gearbox sends power to all four wheels, unlike in the Passat (if you want four-wheel drive on the VW you have to step up to the 2.0 BiTDI 240 engine), so traction off the line and in slippery conditions is good. It means you can also lean on the car harder and make swifter, safer progress in the wet.

With so much kit as standard, the GSi makes everyday driving easy. Nav, Bluetooth, DAB and Vauxhall’s OnStar system are standard, as are leather bucket seats, climate and cruise control, lots of safety equipment and a Bose stereo. 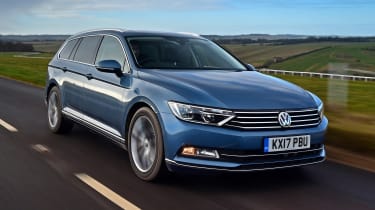 Despite the furore surrounding its turbodiesel engines, Volkswagen’s TDIs are a known quantity. The 187bhp 2.0-litre version in this Passat Estate is no different, but, as with most diesels, its performance here comes more from the 400Nm of torque.

Even though the Volkswagen delivers 20bhp less power, a 0-62mph sprint time of 7.9 seconds isn’t far behind the Insignia GSi’s, helped by a lower kerbweight, and the Passat’s punch in the mid-range is strong, too. Combined with the dual-clutch gearbox, it means the VW has real under-the-radar overtaking potential.

Smooth and snappy gearshifts help here. Although the transmission is a little jerky when manoeuvring at low speed, like some other VW DSGs are, when you’re on more open roads the gearbox switches ratios with barely any fuss and very impressive haste for a diesel family estate. 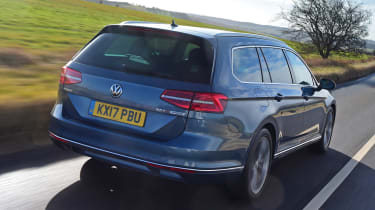 This refinement is reflected at speed, because the Passat rides well and is a quiet cruiser. However, when you rev the engine hard it does emit a coarse sound, so although there’s plenty of performance on offer, tapping into it means you’ll hear the diesel drone.

Our pictures show a GT model rather than the R-Line we’re testing. It was fitted with Volkswagen’s £735 Dynamic Chassis Control adaptive dampers, which broaden the car’s ability even further. This option gives a selection of variable suspension modes, allowing you to choose from Comfort, Normal or Sport settings.

In Comfort mode the lengthy wheelbase means it rides rolling surfaces sweetly, with a nice relaxed gait. You obviously feel larger bumps and ridges a little more, but the damping is still plush enough that it doesn’t disrupt comfort as much as in the firmer Insignia. 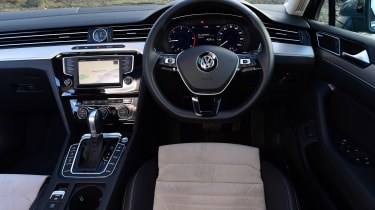 Sport mode tautens up the body control, but unless you’re attacking country roads there’s not really much point in selecting it, because the Passat feels a more complete car in Comfort.

That’s helped by a long list of equipment in R-Line trim. You get LED lights, a sportier bodykit to match the GSi’s enhanced looks, 18-inch alloys, bespoke R-Line trim inside, adaptive cruise and climate control. 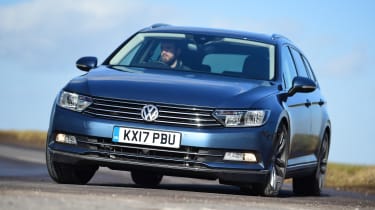 The Passat might not be as fast as the Insignia GSi, but its performance isn’t far away. That it’s cheaper to buy and run, more comfortable and even more practical outweighs a slight shortfall in speed as these cars need to cover many bases. The VW does so more effectively. 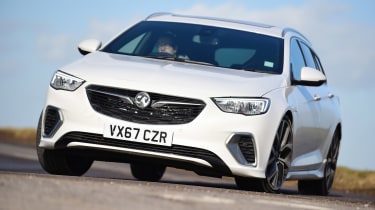 The GSi has strong pace and handles well, but it doesn’t balance this with comfort quite as effectively as the VW. It’ll also be pricier to buy and run, and it won’t be as practical. The Insignia makes most sense as lower-powered, less focused and cheaper family transport.