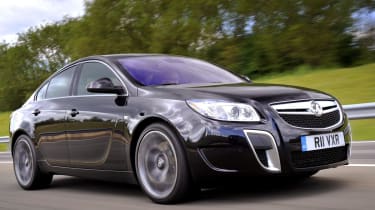 For many years, Vauxhall’s VXR models have been totally focused on power and straight-line speed – so much so that handing finesse has taken a back seat. But that’s all changed with this Insignia VXR. It has the sophisticated chassis to match its exceptional 321bhp turbocharged V6 engine. And the result is an incredibly fast but safe performance saloon. Apart from hefty running costs, the Insignia VXR’s biggest problem is the Vauxhall badge on the front grille – everything else about stands up to premium rivals from Audi, BMW and Mercedes.

Packing a turbocharged 321bhp 2.8-litre V6, sophisticated suspension and four-wheel drive, the technical specification for Vauxhall’s Insignia VXR reads like something you might see in an Audi brochure.

But priced from £30,995 it’s slightly cheaper than the car it seeks to rival – the £34,260 Audi S4. Sitting at the top of the excellent new Insignia range, can the VXR model prove that Vauxhall can also challenge premium car makers with a performance version too?

The Insignia VXR stands out from the rest of the line-up – but it’s not garish in the way that previous models have been. At the front is a deep bumper with twin mesh grilles while a spoiler is added at the rear, along with a new bumper featuring dual matt chrome exhausts. The overall result is sporty but surprisingly subtle.

While the visual upgrades are subdued, the mechanical changes are anything but. As well as four-wheel drive, the hot Insignia gets a front suspension system, which like the RevoKnuckle system fitted to the Ford Focus RS, limits torque steer and boosts grip by maintaining negative camber during cornering.

There are also specially developed Brembo brakes and standard 19-inch wheels (20-inchers are an optional). But the changes don’t end there. The firm’s three-stage Flexride system is tweaked, giving drivers the choice of Normal, Sport settings, together with a hardcore VXR mode. The latter delivers more direct steering, sharper throttle response and stiffer dampers. And as a neat final touch it turns the illumination of the dash dials a menacing red.

Do these changes work? Undoubtedly. Finally this is a VXR-badged Vauxhall that can cope with the enormous power its engine produces. And that’s just as well given that the big turbocharged V6 kicks out 321bhp and 435Nm of torque. From a standstill it rockets the Insignia to 62mph in just 5.8 seconds, but find a tight corner and that sophisticated chassis means you can accelerate out with confidence, all four wheels gripping hard and launching the car at the horizon.

Of course, that engine sounds fabulous too, with a bassy V6 note overlaid with some exciting turbo rush – although the exhaust can generate an intrusive boom on long journeys. The steering is accurate and well-weighted, and what’s more, the ride is very well-judged, being firm but still big-car comfortable. Strong brakes complete the package and the result is a true dual-purpose sports saloon, capable of putting a smile on your face on a B-road but settling to a comfortable cruise on the motorway.

There’s no doubt, though, that the Insignia VXR will be pricey to run. With combined fuel economy of 24.7mpg and CO2 emissions of 268g/km (274g/km for the Sport Tourer), owners will need deep pockets. But it’s no more expensive to run than an Audi S4 – and it does a very, very good impression of that car with a driving experience that’s fast, fun but secure in all weathers.