Vauxhall is aiming to breathe new life into its workaday hatch. We see if its efforts are a success 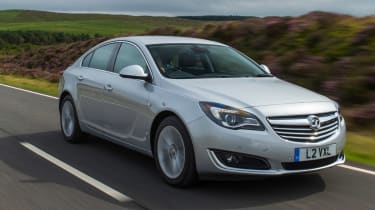 It’s easy to criticise the Insignia. Despite being an attractive choice, it’s never been exciting, and has become synonymous with the drudgery of weekday motorway miles. The car still won’t thrill, but Vauxhall has fixed the dated interior and poor ride comfort of old. The Insignia remains a car fleet managers will buy with their heads, but the new engine and improved running costs make that decision easier to come to.

The Vauxhall Insignia has been an almost permanent fixture on the nation’s motorways since October 2008. This latest facelifted model comes with a re-engineered 2.0-litre diesel, delivering class-leading and tax-friendly 99g/km CO2 emissions, beating the cleanest 2.0 diesel versions of the VW Passat and Ford Mondeo by 20g/km.

This CDTI engine is available in two states of tune – 118bhp or the 138bhp version driven here. Both promise 76.3mpg economy, while the CO2 output means the Insignia’s Benefit in Kind rate is 14 per cent – four per cent less than the VW or Ford. That’s good news for the fleet drivers who will make up 85 per cent of all owners. It also means the car has a theoretical range of more than 1,100 miles – or London to Budapest – on a tank of diesel.

On start-up or under higher throttle loads, there’s still a noticeable clatter from under the bonnet, but it’s an improvement over the old version of this engine. Power delivery is linear, too, so there’s still reasonable low-down power but no big thump of acceleration when the turbo kicks in at about 1,700rpm.

The gearshift has a short, positive throw, and the gear ratios aren’t too long, making the Vauxhall feel responsive, if not quite as lively as a Mazda 6. The Insignia’s not quite as sharp to drive as the Mazda, either. The steering has a new, more direct calibration, but the build-up of weight as you add lock feels a bit artificial.

Revised rear suspension has a lot to do with how positively the steering reacts. It includes new bushings that give the car a softer edge, and a decent step up in ride comfort. However, the Insignia is susceptible to the size of wheels and tyres you choose.

On the standard suspension, the larger-profile tyre on the new 16-inch alloy makes the car’s rear bounce around like an unladen van. Upgrade to 18-inch rims with the Sport pack (£490), and the lower tyre profile gives the ride more control, but still remains comfortable.

A new, better-proportioned exterior design helps make the Insignia a quiet cruiser because it’s now more aerodynamic than before. The car also gets an active grille shutter under the front number plate, which closes at speed to cut drag.

The cabin revamp includes a nicer centre console, while our test model had the new £400 optional eight-inch TFT instrument cluster. It’s clear and easy to read, and looks quite classy. It reflects the general upturn in quality of the dashboard. The eight-inch central Intellilink system has better graphics and integration than Mazda’s TomTom-sourced unit, although it’s not as intuitive as the set-up in the Passat.

The Insignia is already a success, but now it’s cheaper to buy, run and insure than before. We’d all better get used to the fact that plenty are coming to an outside lane near you soon.