The all-new T-Roc crossover now starts from £18,950 along with a new engine for the Arteon saloon and a range of Mk6 Polo models 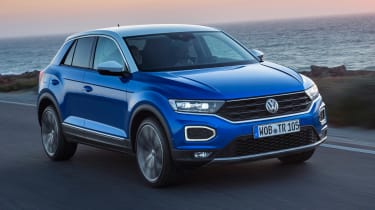 Volkswagen has announced a series of range updates across the Polo, T-Roc and Arteon lineups with a wider range trim levels and engines options now available to buyers.

The T-Roc crossover is now offered in entry-level S trim from £18,950, equipped with a 1.0-litre turbocharged three-cylinder engine producing 113bhp. VW has also added a 2.0 TDI SEL model from £28,345, powered by a 148bhp 2.0-litre diesel paired with four-wheel-drive. Both new models come with a six-speed manual gearbox only.

The all-new Polo supermini doesn’t go on sale until January but VW is now offering its entry-level 74bhp 1.0 TSI engine on SE and Beats trim models. It comes with a five-speed gearbox and starts at £15,060 in SE trim, while high-spec SEL models feature a more powerful 113bhp version of the same engine.

Rounding off the updates is the VW Arteon, which is now offered with a 148bhp 1.5-litre turbocharged four-cylinder engine. It features cylinder deactivation technology to help save fuel. A choice of six-speed manual and seven-speed DSG gearboxes are available across Elegance and R-Line trims.

Are you tempted by any of VW’s offers for the Polo, T-Roc or Arteon? Let us know in the comments!