Volkswagen is planning a new Mercedes S-Class rival and it will be based to the brand’s I.D. Vizzion concept 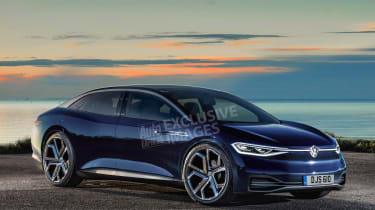 Volkswagen will return to the luxury class at the turn of the next decade with an all-electric Mercedes S-Class rival based on the I.D. Vizzion concept.

Bosses have tasked the unnamed model with helping to instill the brand with a sense of luxury that failed to stick with the Phaeton back in 2002. VW has been without a flagship saloon since that model was axed in 2015.

“Phaeton is a symbol of what VW needed at the time. It was the positing of VW into the upper market and showed the capability of the brand, in terms of quality and tech,” sales and marketing boss Jürgen Stackmann told Auto Express. “I.D. Vizzion takes the same position; it shows our leadership ambition for EVs and, in the more distant future, for autonomous driving.”

The new electric saloon, previewed by our exclusive main image, will lean heavily on the I.D. Vizzion concept seen at March’s Geneva Motor Show. It will also rival the Tesla Model S, and will retain the concept’s long body and wheelbase, made possible by the flexibility of the VW Group’s new MEB platform.

Stackmann added: “We want to put I.D. Vizzion into a reality, but not with Level 5 [autonomous driving], and the timing is planned for around 2022. We did not even think for a second about what [powertrain] system we should put into the flagship model; it’s a flagship for the next generation.”

The flexibility of the MEB platform will allow VW to offer a range of battery sizes and drivetrain configurations. Having one electric motor on the front axle and one on the rear can create the possibility of four-wheel drive. 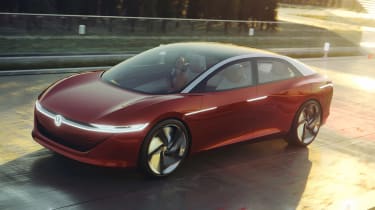 Bosses have previously confirmed VW’s upcoming electric vehicles will be capable of at least 400km (248 miles) on a single charge, with 600km (327 miles) set as the target for larger vehicles such as the Vizzion.

Stackmann told us: “Luxury will get a new definition in the EV space. I think EVs provide a lot of opportunities to position luxury in a new field because the platform provides a new dimension of space in the interior, and space is perceived as a luxury by many people.”

When the Vizzion lands in 2022 it will join an existing fleet of electric VWs, spearheaded by the I.D. hatch at the end of 2019 and the Crozz SUV the following year.

The Volkswagen Phaeton was the last luxury car from the brand. Read our in-depth review here...

Welcome to our Geneva Motor Show hub page, scroll down for all our Geneva content...
VW to pay customer £25,000 following new Dieselgate ruling