Volkswagen could build electric cars for its rivals, says boss 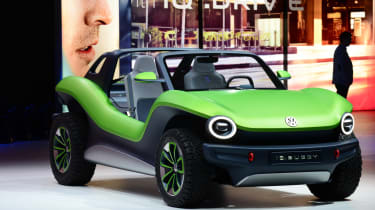 Volkswagen's desire to license its MEB electric vehicle technology could even extend to building cars for rival manufacturers at its factories, the company’s boss has admitted.

The German automotive group has previously said that it is in talks with Ford about possibly licensing its MEB components - batteries, electric motors and chassis - to help increase volumes and improve profitability in what is still a fast-developing area of the market. Last week, at the Geneva Motor Show, VW announced the first third-party deal for the tech, with German start-up EV company e.GO Mobility.

Speaking at the VW Group annual conference, the Chairman of the Board of Management, Dr Herbert Diess, admitted that the company was in talks with additional third parties, beyond Ford, and said that it would consider a licensing agreement, even if the cars produced because of it are rivals for the likes of the forthcoming VW I.D. family of EVs.

“We’ve had a few more requests about licensing MEB,” Diess said. “We’re strong in China, so you can imagine, and licensing MEB would open it up for smaller manufacturers to become relevant. Ford is one of our rivals in Europe so if Ford is to use our platform, then we would be prepared to help there.”

“Manufacturing is to be considered, let’s say,” Diess added. “I wouldn’t say we would invest in a plant specifically [to build cars for other OEMs] but if we have spare capacity, and it makes economic sense, it’s an option.

What do you make of Volkswagen's idea to potentially build cars for its rivals? Let us know in the comments below...