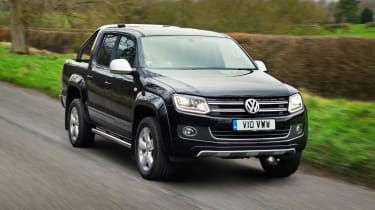 High equipment spec and extra styling add-ons bring more appeal in this VW Amarok Ultimate model, but as a commercial vehicle the high purchase price and running costs mean the Amarok can’t beat the best in its class.

Most commercial vehicles are long on dependability and a bit short on luxury, but the Volkswagen Amarok pick-up has always bucked that trend by blending an SUV style interior with refined road manners – and now with this Amarok Ultimate limited edition, there’s an even higher level of equipment on offer, too.

Just 500 of these Ultimate versions will make it to the UK, and you can tell it apart from lesser models thanks to an Amarok first: LED running lights as part of the bi-xenon headlights. There’s also a set of 19-inch polished alloy wheels and some extra, bright trim parts and window tints to complete the look. Its rugged design is highlighted by the chrome rear bumper, load bay bar and grille strips, which give the Amarok even more presence. 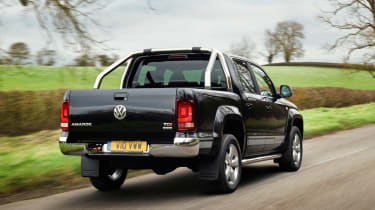 The makeover continues inside with Alcantara seats (heated in the front), a leather steering wheel, Bluetooth, sat-nav, front and rear parking sensors and a reversing camera to help when manoeuvring the VW’s sizeable bulk.

Being based on the standard Amarok BiTDI, the Ultimate has the performance to back up its looks. Under the bonnet there’s a 178bhp 2.0-litre twin-turbodiesel engine available with either a six-speed manual or an eight-speed DSG auto box. We’ve driven the manual version here, which makes 20Nm less torque than the auto at 400Nm, but there’s still lots of smooth load-lugging ability on offer.

The 0-62mph sprint takes 11 seconds, but it’s more about in-gear acceleration. The motor is very flexible and doesn’t transmit many vibrations through to the cabin. It’s noisy if you rev it hard, but change up early and, along with cruise control, long distance journeys are dispatched easily. 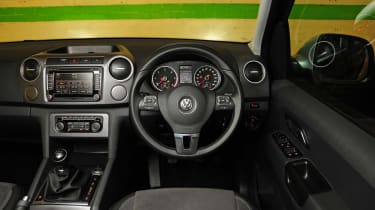 There’s ample legroom in the double cab body style, but with a 2.5m square load bay and a 3,000kg towing limit, the VW is equally at home when it’s being pressed into service. Selectable four-wheel drive and a low-range gearbox mean it’s just as impressive off-road.

It feels robust, with a composed ride compared to some of its rivals. However, slow steering means you have to work the wheel, but a light clutch ensures it’s easy to drive around town. However, a high price and poorer efficiency at 35.3mpg and 211g/km CO2 means the Amarok will be costlier to buy and run compared to newer rivals like the Mitsubishi L200. As a working vehicle, this could hold it back.