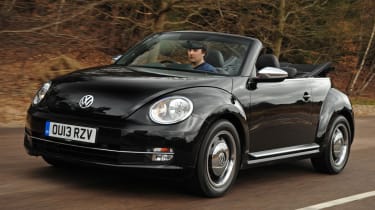 It's not the most thrilling car in the world to drive and the rear seats are a little cramped, but the Beetle Cabriolet looks good value next to the soft-top Golf, with more equipment for a lower price. If you’re not concerned about dynamics but want head-turning looks, this Beetle Cabriolet 50s is well worth considering.

The timing couldn’t be better – the sun has come out and Volkswagen has introduced the new Beetle Cabriolet in the UK.

At launch, it’s available in this stylish 50s trim level, featuring 17-inch Orbit Black alloys and chrome mirrors. The Beetle has a focus on style, and the admiring glances from other drivers and thumbs up from passers-by show VW has got it spot-on.

Inside are black and red leather seats as standard, plus a sports dash with three dials above the centre console. Rear passengers will find the seats cramped, though, plus they’ll be buffeted around with the hood down; the wind isn’t such an issue for those sitting up front.

Our car’s 158bhp 1.4-litre TSI engine feels punchy throughout the rev range, and gives 0-62mph in 8.6 seconds. Those with an eye on fuel bills won’t be too shocked by the 41.5mpg economy, either.

The Beetle Cabriolet feels slightly firm around town, but the ride comfort is pretty good on the whole. Handling is fairly neutral and uninspiring, although it feels safe and secure. So while the Beetle Cabriolet isn’t a car for keen drivers, it looks great and does very little wrong.

As a style-focused alternative to the Golf Cabriolet, it makes a good case for itself, especially with heated leather seats and parking sensors included for the £24,660 price.