The Caddy Maxi is a perfect example of how far van-based MPVs have come. It’s big, practical and surprisingly good to drive 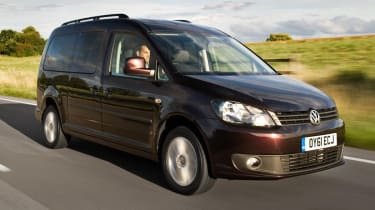 Take one commercial vehicle. Add a couple of rows of extra seats in the back and, hey presto, you have a cheap and cheerful MPV. It’s a simple formula, but the Volkswagen Caddy Maxi adds something different to this no frills approach with its desirable badge.

Volkswagen doesn’t try to hide the origins of its van-based MPV. Unlike Ford's Tourneo Connect, it proudly flaunts its compact people carrier’s utilitarian DNA and markets it as part of the versatile Caddy van range.

Although it’s more costly than its mainstream rivals from Peugeot and Citroen, with seven full-sized seats, a selection of diesel engines and VW interior quality, the Caddy Maxi doesn’t feel like a simple van with windows.

On the road, the Volkswagen feels impressively composed. The 1.6-litre TDI diesel  produces a modest 101bhp and can't match rivals from Mercedes and Ford for refinement, but it still manages to accelerate from 0-60mph in 12.1 seconds. For those wanting more muscle, a 138bhp 2.0-litre TDI is also available, but costs £2,304 more to buy.

Out on the road it really comes into its own. Despite standing more than six feet tall, the VW’s handling feels safe and predictable. It drives very much like a passenger car, with well weighted steering and lots of front-end grip, giving you plenty of confidence in its ability to tackle tight corners. 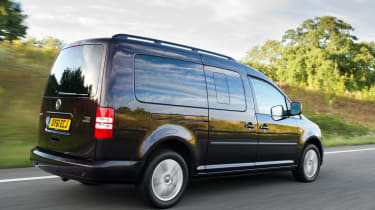 The ride is a bit bouncy when the Caddy is empty, but this improves significantly when carrying a load. At higher speeds, the VW feels stable, and it keeps its composure well on bumpy and undulating roads. It also feels remarkably nippy around town, where a tight turning circle and good visibility offset the car’s Mercedes S-Class-rivalling length.

Only on long journeys is the Caddy’s commercial vehicle DNA really obvious. The driving position is excellent and the seats comfortable, but the giant cabin acts like a resonator, amplifying road roar.

You get a choice of three diesel engines, starting with a 101bhp 1.6-litre TDI, providing a claimed economy of 48.7mpg. It’s available in BlueMotion Technology trim with start-stop technology among fuel saving measures, pushing economy to a claimed 54.3mpg. If you want more power, there are 108bhp and 138bhp versions of the 2.0-litre TDI.

The lower output model is only available with 4MOTION all-wheel drive, and official economy of 43.5mpg, while the flagship diesel registers 46.3mpg. Both it and the 1.6 TDI are available with DSG twin clutch manual gearboxes. The Caddy Maxi isn’t cheap, but it’s one of the biggest of its type, air con and twin sliding rear doors as standard.

All Caddy Life models come with air-conditioning, electric windows, a trip computer and an aux-in connection for external music devices. The standard-wheelbase model will set you back £17,090, while the seven-seat Maxi Life costs £20,897.

The Volkswagen Caddy started life as a Golf-based pick-up back in 1980, and still shares many elements with the latest edition of the popular hatchback. However, since 2003, it has borrowed just as many components from the Touran people carrier, and its facelift in 2010 made the similarities more obvious than ever.

The front end is almost indistinguishable from the Touran and features the same square lights, short bonnet, deep windscreen and thin pillars. In fact, if it wasn’t for the Caddy’s large wing mirrors, it would be hard to tell the two vehicles apart from the front.

However, a side view reveals the large sliding door with mounted windows, which acts as the MPV’s calling card. The entry-level Maxi Window Van has unpainted bumpers and steel wheels, but the Maxi Life model gets colour-coded bumpers, 15-inch alloys and black roof bars.

Inside, the similarities to the people carrier are also prominent, although the Caddy is unapologetically basic. The central console features the same screen and buttons, the gearlever and central divide follows the same design and the instrumentation layout is nearly identical.

In the Caddy, dark grey is the only trim colour and hard plastic replaces the soft-touch materials found in the Touran. As standard, the Caddy has an open glovebox, and there’s plenty of painted metal on display.

The Caddy isn’t short of space, but VW’s engineers have incorporated a number of clever storage units to optimise the large interior. In the front, there’s a large tray above the driver and front passenger’s heads, a clever space above the dash and cavernous door pockets. There are also hidden trays beneath the front seats, plus four elasticated nets above each door. 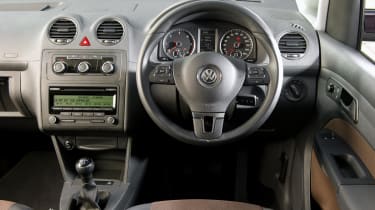 As you’d expect, the boot is vast – capacity is 3,200 litres with the seats down. There are also six load-lashing eyelets set into the floor, a 12V power supply and a retractable load cover. The longer-wheelbase Maxi Life also features a third row of seats, which offers decent space but is a little awkward to access.

It’s better news for occupants in the middle row, as they get loads of head and legroom – there’s easily enough space for three adults to sit comfortably.

Build quality on the Caddy is as you would expect from any Volkswagen: excellent. The cabin is basic, but all the materials are good quality and feel durable. The TDI engine is tried and tested on many other VW models, including the award-winning new Golf, and previous versions of the vehicle have been heralded for their reliability.

In terms of safety, however, the Volkswagen doesn’t do quite as well. It only scored four out of five stars in NCAP’s crash testing programme, although that was under the old-style test in 2007. Even so, the Caddy comes with six airbags, stability control and automatic activation of the hazard warning lights during emergency braking.