We try the world’s first-ever diesel hybrid in five-door hatch! 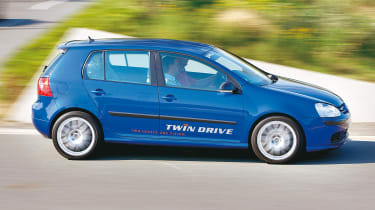 As a feat of packaging, the Golf Twin Drive is impressive. It offers the same amount of passenger and load space as a regular Golf, yet the driving experience is blunted only slightly. If the economy figure proves true, it’s amazing – but we wonder why VW is waiting so long to bring it to dealers.

Here’s the Golf’s not-so-evil twin! This is the Twin Drive – Volkswagen’s late, late ticket to the electric hybrid party. But it’s got a trick up its sleeve. The car is the first-ever hybrid to feature a diesel engine – and Auto Express has driven it!

There are only 20 Twin Drive prototypes in existence, but we got behind the wheel to give you the definitive verdict on VW’s clean, green derv sipper. And sip diesel it does. Bosses say this Golf returns 113mpg – that’s more than twice what a 2.0-litre TDI can muster!

The unbelievable economy comes from the blend of a frugal 1.5-litre common-rail diesel and three electric motors: one in the bonnet next to the engine and one in each of the back wheels.

When travelling at speeds of up to 31mph, the Golf takes its power from the electric motors solely. But only if driven gently – the diesel motor will take over if the accelerator is pressed hard, providing a slug of extra power.

Beyond 31mph, the oil-burner kicks in as a matter of course, charging the battery and driving the car. At motorway speeds, the diesel provides the go.

Together, the electric motors and engine produce 175bhp. How does this translate on the road? Well, the Golf is eerily silent at start-up and travelling below the magic 31mph mark. It feels heavy, but rides well and handles with the composure you expect of the VW hatch.

The car weighs 250kg more than a 4MOTION TDI, although the fact that two of the motors are at the rear means the burden is spread evenly, so handling isn’t affected too severely.

Charging the Twin Drive is easy, with plug-in points in the front and rear bumpers. It takes four-and-a-half hours from a 220V source. VW says that costs about £1.40 at current prices, for around 30 miles of urban driving. Stop-start technology helps conserve the charge of the water-cooled electric motors in town.

So it drives well, seats four adults like any other Golf and has incredible economy. It’s just a pity VW isn’t putting it into production for seven years.