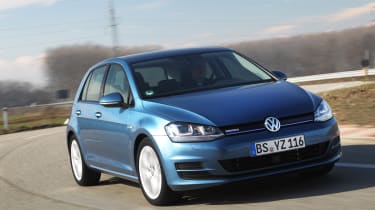 The Golf BlueMotion has consistently proved that meticulous engineering and attention to detail can yield startling fuel savings. This latest version is the best yet and, unlike a lot of its rivals, it feels nothing like an eco-special. It rides tolerably, handles well, is built like a premium car and looks great. The Golf BlueMotion is so good you wonder whether there’s any point to the forthcoming hybrid version. This is the most rounded offering in a range that’s better than ever.

Fancy filling up just 10 times a year? That’s what Volkswagen says is possible with the Golf BlueMotion, as it’s theoretically capable of 970 miles between fill-ups.

At the root of those claims are VW’s official figures of 88.3mpg fuel economy and CO2 emissions of 85g/km. The Toyota Auris Hybrid (74.3mpg and 87g/km) comes close to this, but no petrol or diesel car can match the Golf’s efficiency.

To continue this trend of ever-increasing efficiency, the latest BlueMotion has shaved 26kg from the running gear and 37kg from the body compared with its predecessor. The 1.6-litre diesel, meanwhile, now has reduced internal friction, a faster warm-up, exhaust-gas recirculation, a twin-stage oil pump and an electric water pump. The engine also features an oxidation catalyst, particulate filter and NOx storage catalyst.

The body has been made 10 per cent more slippery through the air than the standard car, with a 15mm lower ride height, a roof spoiler, a masked front grille, partially closed air inlets and under-floor panels. There are also low rolling-resistance tyres, longer gear ratios for the five-speed manual and battery regeneration.

Impressive fuel consumption figures are one thing, but if the car rides and drives horribly – as some eco-specials do – then no one will want it.

Climb into the BlueMotion and you’ll find the high-quality Golf interior is unchanged. The engine starts with a bit of a clatter, but idles quietly enough. Plus, with the excellent stop-start system, it won’t often be running when you’re at a standstill.

Acceleration through the gears is brisk, with the car able to go from 0-62mph in a respectable 10.5 seconds. There’s also comfortably enough torque to pull the car along from as low as 1,500rpm, although the engine has a noticeable boom between 1,600 and 2,000rpm.

There’s a subtle vibration through the major controls at low speeds and, while that disappears at higher engine revs, you can hear and feel the vibration from the tyres at all speeds. It’s not dreadfully unpleasant or hugely intrusive, but it’s definitely there, which is an unusual sensation for this latest generation of Golf.

The gearbox is as easy to use as we’ve come to expect, and considering the longer gearing of the BlueMotion model, it’s surprising how well it pulls in top gear. During an hour driving on the autobahn at an easy 85mph, we saw average fuel economy of 55mpg.

With accurate body control and well weighted and accurate steering, the BlueMotion handles crisply and rides comfortably. The mild regenerative braking system is barely noticeable, too, allowing you to confidently make the most of the brakes.