The Volkswagen Golf BlueMotion offers CO2 emissions of 85g/km, making it cleaner than the Toyota Prius 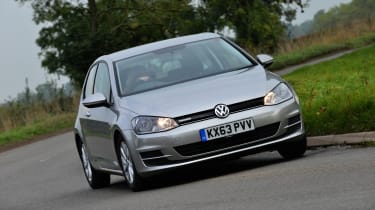 The BlueMotion is everything people love about the Golf but with some staggering fuel economy figures thrown in for good measure. From a private buyer’s perspective the cheaper 1.6 TDI S probably makes a little more sense but for companies – who won’t have to pay Corporation Tax on it – and company car buyers who will also pay less, the BlueMotion is a seriously good car.

The Volkswagen Golf BlueMotion is even cleaner than a Toyota Prius, with fuel economy of 88.3mpg and CO2 emissions of 85g/km.

Before you step behind the wheel, you’ll have to take in the spoiler on the bootlid, the 15mm lower ride height and the Bluemotion badging because everything from here on in feels like any other Golf in the range.

The 109bhp 1.6-litre TDI is fitted with an electronic water pump and has seen internal friction reduced over the standard 104bhp 1.6 TDI. The result is an engine with real punch – one that feels immediately responsive, and a good deal quicker than its 10.5-second 0-62mph time.

Refinement is still top notch but stepping out of a non-BlueMotion TDI Golf and in to this car will reveal the slightest of rattles from the engine. As a whole, though, it’s excellent both under acceleration and while travelling at motorway speeds.

The lower ride height has the potential to be damaging to the ride but the standard 15-inch alloys have enough soft rubber on them to cancel out any negative effect. Rough roads and small undulations feel as though they’ve been smoothed over, while the suspension takes the edge of those bigger bumps and potholes.

It handles nicely, too, with the kind of sure-footed responses you’d expect from a Golf. It’s admittedly not the most thrilling car to drive but in the world of eco-specials it has to rank somewhere near the top thanks to its taut body control and impressive levels of grip.

Those fuel economy figures are mightily impressive as well but it’s nigh on impossible to achieve anything near that in the real world – various different carefully driven routes yielded anything from 48mpg to 65mpg. Although it’s worth mentioning that you’ll struggle to achieve anything better than that in any of the BlueMotion’s rivals.

With the BlueMotion starting at £20,355 and the 1.6 TDI S on which it’s based costing from £19,120, there is a significant difference between the two. Which you should go for depends on your situation – the standard S delivers similar real-world economy, while the BlueMotion’s ultra-low CO2 emissions means it makes sense to both companies and company car drivers.