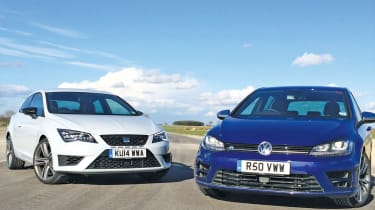 With snazzy looks, four-wheel drive and just shy of 300bhp, the new Volkswagen Golf R is the pinnacle of the massive Golf range. But is it the best hot hatch in the VW Group stable?

To find out, we brought along the new SEAT Leon Cupra 280, which has just taken the fastest ever lap time around the Nurburgring for a front-wheel drive car, for an Auto Express track battle.

The most powerful production Golf ever made, the new Golf R costs £31,970 if you choose the DSG gearbox and five-door body. It gets 296bhp and 380Nm of torque from its 2.0-litre turbocharged engine, and has four-wheel drive to put all the power on the road.

Lighter and cheaper than the Golf, the SEAT Leon Cupra is only front-wheel drive, but it has similar underpinnings and the same engine. It develops 276bhp and 350Nm of torque. Like the Golf, this car is fitted with the DSG dual-clutch gearbox.

So which car comes out on top in our hot hatch head-to-head? Well, it's a bit expensive, but we really like the Golf R. It's a great road car - it's fast, upmarket and composed. But on the track the SEAT Leon Cupra may only be front-wheel drive, but it has almost as much traction, it's much more agile and it's faster against the stopwatch.

Crucially it's nearly £4,000 cheaper, so in this head-to-head track battle it's the SEAT Leon Cupra that takes victory. 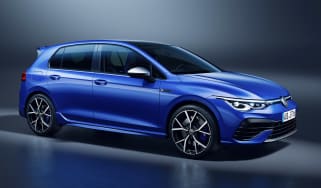 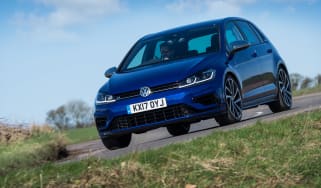