If the latest crop of hot hatches isn’t quite hot enough for you, this trio of supercar-quick pocket rockets should be just the ticket.

Leading the charge is the all-new Volkswagen Golf R which, with 296bhp and 380Nm of torque, is the fastest-accelerating production Golf ever. Fitted with a fifth generation of VW’s Haldex 4MOTION all-wheel drive, it’s the latest in a long line of ‘wolf in sheep’s clothing’ flagship Golfs. But can the new R replace the GTI in the hearts of fast VW fans? And is it better than two very interesting

The even more powerful Mercedes A45 AMG has rewritten the rule book when it comes to hot hatch performance, although it’ll cost you £6,220 more than a five-door Golf R with a DSG box. Alternatively, you could go for Audi’s new RS Q3, which uniquely blends crossover practicality and high-riding stance with traditional fast Audi looks and power, as well as a characterful five-cylinder engine.

All three cars will cover 0-60mph in under five seconds, but which of the trio is the pick of the bunch?

Click the links above to read each review, and then read on for our verdict.

In 2000, Porsche launched the 996-generation 911 Turbo, which was capable of doing 0-60mph in 4.2 seconds. Only 14 years on and these family hatchbacks match an early 21st century supercar.

We recorded our own acceleration and braking figures at the track, and the results show how closely matched all three cars are. With launch control systems, in the wet they all matched or bettered their official claimed performance. 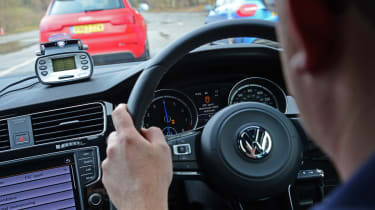 All three cars have dual-clutch transmissions, but the Mercedes’ seven-speed DCT box is a real highlight. In manual mode it gives you full control with no kickdown or auto upshifting and has a lovely fluttering exhaust on each change. However, only the Golf is available with a traditional manual gearbox.

The Audi Q3 offers more rear legroom than the Golf, but as the wheelbase is shorter than the hatches’, you don’t get the SUV space you expect. A tapered roofline and tighter rear means the A45 can feel claustrophobic. 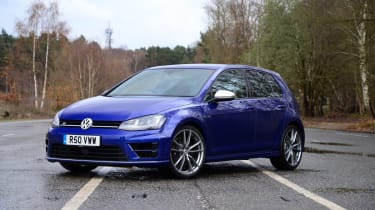 While the Golf R often struggles to make a case for itself against the GTI, it’s a great hot hatch that adds all-wheel-drive traction and extra power to the usual upmarket package. It’s cheaper than its rivals here, and has performance to match. 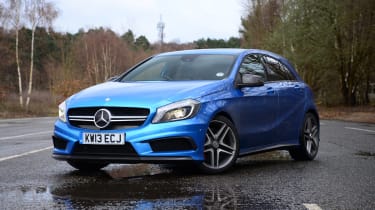 There's much to like about the A45 AMG. It looks great, is the cheapest AMG model yet and its turbocharged engine produces incredible power. But the steering could do with more feel and the optional extras are expensive. 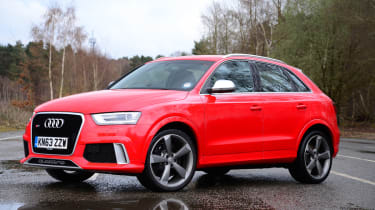 The RS Q3 is another example of Audi filling every niche. The engine is packed with character and the chassis is fun, plus it holds on to its value well. However, the looks won’t be to all tastes and, in this company, it’s an expensive choice.