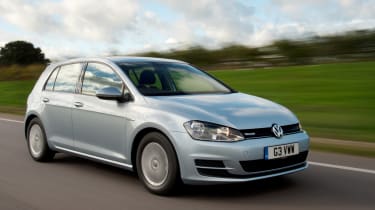 VW’S pulled a masterstroke here. No longer does owning a 1.0-litre three-cylinder hatch mean compromises in refinement and comfort. This model offers a genuine alternative to diesel, too. With a manual box we’d have given it four stars, but the irritating auto can be painfully slow to react. The manual’s cheaper and complements the otherwise excellent package.

Volkswagen may well be tightening the purse strings in the wake of the diesel emissions scandal, but there are certain cars whose future is secure. One is the Golf Mk8, with development of the next family hatch well underway for launch in 2018.

Before then, however, the current model has still got to turn a healthy profit, so there’ll be a smattering of new derivatives and a facelift in 2016 to keep the coffers topped up. One of those new Golfs is this – the petrol-powered BlueMotion 1.0-litre TSI. 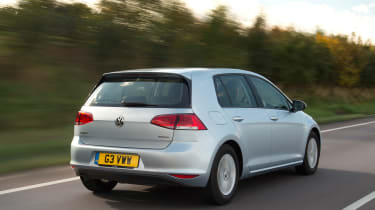 It’s the first petrol Golf to wear the BlueMotion badge. The little three-cylinder turbo packs a more than reasonable 113bhp and 200Nm of torque, and claims 65.7mpg and 99g/km – if that can be believed.

These days you expect small petrol engines to be quiet, but knocking off 200cc and one cylinder always brings refinement compromises. Not so with the Golf 1.0-litre. It’s easily the most refined three-cylinder family hatch and is in virtually another league compared to Ford’s Focus 1.0 EcoBoost. The stop/start system fires into life with barely any vibration, and the characteristic three-cylinder hum is so quiet, we could have confused it with a 1.4 or 1.6 – it’s that good.

It’s not only quiet, but also very smooth. The power kicks in at 1,000rpm and really shows its muscle in the mid-range before quietly tailing off at 5,500rpm. This Golf’s comfortable, too. Even though it’s based on a lower spec and lacks fancy independent rear suspension, there’s plenty of grip, while the steering is accurate and full of feel. 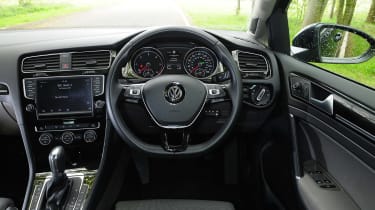 But all those impressive attributes are virtually cancelled out by the auto gearbox (a £1,415 extra) on our test car. It’s the same excellent seven-speed DSG found in most VW Group cars, but here it’s been tuned to make the Golf 1.0 BlueMotion as fuel efficient as possible – and it’s infuriating. Pull away from a junction and the box will start in second, offering virtually no acceleration. Boot the throttle and there’s an alarming pause before the car lunges forward. It’s compounded by the lack of wheel-mounted paddles, although you can change ratios using the shifter.

Still, this car is built as well as you’d expect a Golf to be. Also, being based on value-orientated Match specification, it comes with heated front seats, sat-nav plus front and rear parking sensors.