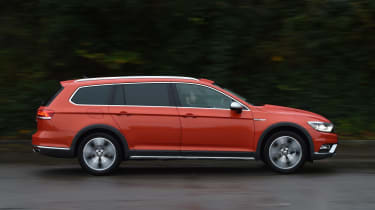 It’s pricey, but with the Alltrack you do get a lot of car and capability for your money. It’s beautifully built  and very pleasant to drive, while the on-demand four-wheel-drive system and off-road add-ons mean it’ll  fare just as well in a British winter  as an SUV. What we’d also recommend is opting for the six-speed manual and lower-power 148bhp model, and pocketing  the £3,080 difference.

With the unpredictable British winter well and truly here, there’s no better time to invest in some four-wheel-drive capability. If full-fat SUVs are a bit too ‘in your face’ for you, and crossovers aren’t quite up to the job, off-road estates such as the new Volkswagen Passat Alltrack could be just what you’re looking for.

Think of this second-generation Alltrack as a Passat Estate with wellies on. Chunky bumpers give it greater protection in the rough, while the extra 27mm ride height and 4WD system will get you further through it.

The Alltrack comes from the same off-road academy as the Skoda Octavia Scout, SEAT Leon X-Perience and even VW’s smaller Golf Alltrack – but the Passat is a little roomier and far more costly, reflecting its position in the class above. 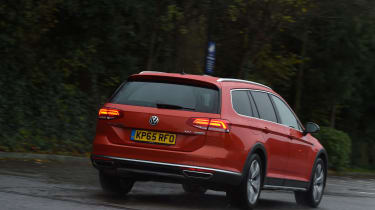 In top-spec versions with the six-speed DSG auto and higher-powered 187bhp 2.0-litre diesel, the car comes in at nearly £6,000 more than the Skoda and £4,000-plus more than the SEAT. You could say that’s a lot to pay for an extra 50 litres of boot space, but the Passat feels more upmarket, with a neater centre console, larger touchscreen and a fraction more rear passenger space.

Nevertheless, this 187bhp version comes with a few more trinkets to justify its inflated price. There’s a full-length panoramic roof, 18-inch wheels and the slick six-speed DSG. As well as the extra power, the range-topper gets 60Nm more torque, up to 400Nm. Not only does that shave 1.2 seconds off the 0-62mph time, at 8.0 seconds, but more relevantly in this class it also means towing capacity increases from 1,800kg to 2,200kg. 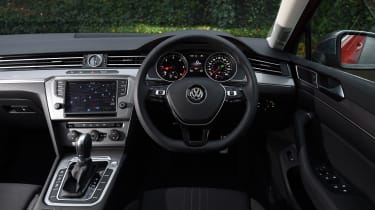 From there, the Alltrack feels – hardly surprisingly – like a marginally higher-riding Passat in which you get a slightly more commanding view of the road ahead. Another thing you’ll notice is the more cushioned ride thanks to the added suspension travel, which helps to take the edge off large road imperfections.

The Alltrack responds just as keenly as a standard Passat estate, but with the added security of four-wheel drive and a softened ride making it even more pleasant from behind the wheel. At every opportunity the VW is driven though the front wheels to help conserve fuel. Only when it detects a loss in traction is power sent to the rear tyres to help keep you on the straight and narrow.