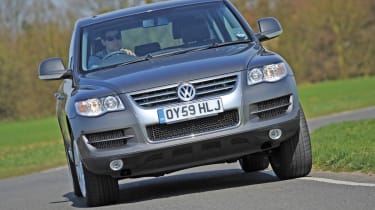 There may be a new Touareg just around the corner, but the case for this BlueMotion model still adds up. It uses tried and tested technology to offer a fuel-efficient large off-roader which now costs less to run and boasts huge all-round ability. And as an outgoing model, there’s a strong chance you could bag a huge bargain by negotiating with your local dealer.

Can a big SUV really be green? If you want your off-roader to be eco-friendly, there are two ways of doing it – hybrid or super-efficient diesel.

Despite an all-new Touareg going on sale later this year with a hybrid variant, VW has brought out a BlueMotion diesel evolution of the current car. Is it worth considering?

Offering 222bhp compared to 237bhp, it’s not as powerful, although it still boasts the same 550Nm of torque and drives all four wheels through a six-speed automatic gearbox.

As with all BlueMotionmodels, VW’s engineers have made a few tweaks in the search for increased efficiency.

So the engine is optimised to save fuel and gets a more efficient alternator, while in come low rolling resistance tyres and a ride height lowered by 25 mm to reduce drag.

What’s more, the Touareg BlueMotion also features a regenerative braking system – shared with the forthcoming hybrid model – which is used to charge the battery while the vehicle is on the move. Do the changes work? Certainly. The BlueMotion returns 34.0mpg on the combined cycle (up from the standard car’s 30.4 mpg) while CO2 emissions drop from 244g/km to 219 g/km.

That results in some hefty road tax savings, qualifying for band K at £215 a year, a full £190 cheaper than the standard Touareg diesel. Buyers beware, though – you’ll still be hit with a huge £550 first-year ‘showroom tax’.

On the move, you don’t notice any of the mechanical changes – a big compliment to Volkswagen’s engineers.

In fact, we found the Touareg BlueMotion a fast, easy to drive, fine handling large off-roader. The only negatives are a slightly jittery ride in town, where small imperfections tackled at low speeds spoil the ride.

Other irritations includea gearbox that can be a little jerky, a lack of rear seat space and a hefty kerbweight of 2,300kg. Its upcoming replacement solves all of these problem areas, but that doesn’t mean this BlueMotion model shouldn’t be off your list, because it still makes a lot of sense.

Rival: Lexus RX 450h Capable of returning 148g/km of CO2 and 44.8mpg, the petrol hybrid RX has the Touareg licked. The big fly in the ointment is the price – starting from £43,000, the Japanese contender is significantly more expensive.