The Volkswagen up! is the 2020 Auto Express City Car of the Year, with the Hyundai i10 and SEAT Mii Electric commended 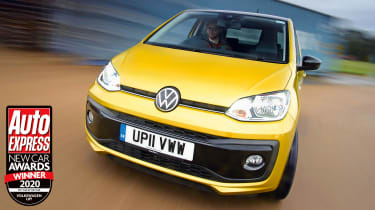 The city car segment is challenging at the moment, but the onset of electrification has helped breathe some new life into the sector – and Volkswagen has exploited that nicely with its revised up! range.

You can still buy the up! as a three or five-door model and with VW’s 59bhp naturally aspirated 1.0-litre three-cylinder petrol engine, and a great city car it is, too, with good punch around town and just enough performance to cut it with motorway traffic. It also rides well, offering a mature feeling to the way it deals with bumps and broken surfaces in towns and cities, where the up! will spend most of its time.

It’s the grown-up feel and relatively strong practicality that are key to its appeal. But the up! range also offers plenty of choice where other city cars do not, so there should be something for every budget.

If you’re after some fun, the 113bhp up! GTI has that covered. It boasts the same level of usability as the regular car, but with a turbocharged version of the 1.0 unit kicking out more power and a lot more torque for more pace. The handling is more involving, too, showing the versatility of the VW’s small car platform, because its architecture also accepts full electrification. 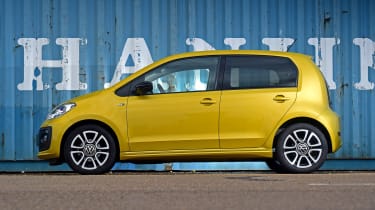 The all-electric e-up! is the newest addition to the line-up and offers a range of up to 159 miles from its 36.8kWh battery, which is quite large for a small car. Practicality isn’t compromised because the e-up! has the same level of interior space and 250-litre boot. CCS rapid charging is included as standard, which means with a 40kW power supply you can top up the battery to 80 per cent in 50 minutes, making it very usable.

While it might be eight years old, updates have kept the up! at the forefront of the city car class. VW initially fitted the car with a removable touchscreen, but this was replaced with a cradle for your smartphone, and given the size and capability of modern devices, this brings all of the features you’d expect.

Overall, the up! is still a brilliant city car that has been advanced thanks to electrification.

We suggest keeping it simple and going for the base-spec up! in five-door trim to help usability. Given that the Volkswagen uses your smartphone for infotainment, you don’t lose out on much kit, but the price is more affordable. Air-conditioning, lane-assist and a five-inch colour screen are all standard, but it’s the way the up! drives that’s the real draw. 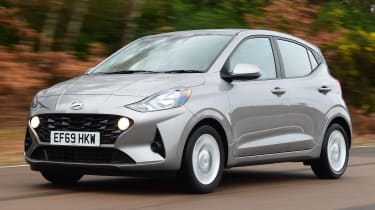 The i10 majors on practicality and tech. This new model adds more style, too, but it’s the space on offer and smartphone connectivity on even mid-spec trim levels that give it big- car features and plenty of appeal. The petrol engine line-up is fine and frugal, so it should be as affordable to run as it is to buy. 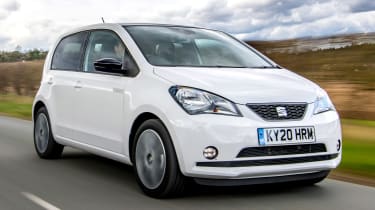 Unlike the up!, the SEAT Mii is only available as an EV. It uses the same powertrain as the e-up! and gets rapid charging as standard, so it offers as much flexibility as it can. It’s also affordable for a full EV, but having no regular ICE model means the choice is a little more limited, even if it’s still a great car for the city.