The Tesla Model 3 is the 2020 Auto Express Compact Executive Car of the Year, with the BMW 3 Series and Polestar 2 commended 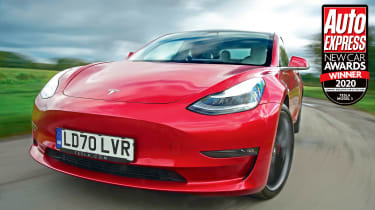 The Tesla Model 3 was our Car of the Year in 2019 and this year it shows yet again why it’s a winner, picking up our Compact Executive Car of the Year award. That’s because the government has changed its Benefit-in-Kind company car tax rules for this tax year so that pure-electric vehicles like this Tesla attract a zero per cent rate for company car tax.

With this class dominated by business users, the financial incentives to run a premium EV are huge, and with masses of tech, great performance, genuinely usable range and impressive charging capability, the Tesla is a champion once again.

There’s no need to go for anything more than the basic Standard Range Plus model, because it offers a range of 254 miles from its 50kWh battery, 0-60mph in 5.3 seconds and Supercharger V3 capability. With 170kW recharging power, an 80 per cent rapid charge should take around 20 minutes, piling on 390 miles of range per hour at its maximum rate.

Step up to either the Long Range (348 miles range, 0-60mph in 4.4 seconds) or Performance (329 miles range and 0-60mph in 3.2 seconds) variants, and their bigger 75kWh batteries allow a maximum charging rate of 250kW. So over a similar period of time for an 80 per cent recharge both of these models will add more than 500 miles per hour of charging at their peak rates. 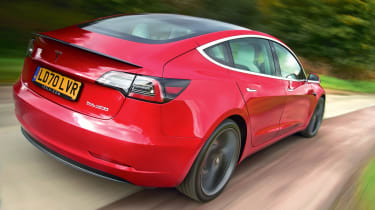 Of course, the Model 3 is the first Tesla to be fully compatible with CCS charging, so it’ll take a more common 50kW feed as well, while the car’s 11kW on-board AC charger means overnight charges on all three variants of the Model 3 will take no more than seven hours and 45 minutes (five hours 15 minutes for the Standard Range Plus) using an 11kW home wallbox, so domestic charging shouldn’t be a problem.

Flexibility is covered, then, and so is performance, as we’ve seen from the figures above. Tesla’s skateboard EV architecture means packaging is great as well, with lots of space inside, plus good head and legroom due to the car having no central tunnel in the floor. There’s a front boot for charging cables and a rear load bay for a total of 425 litres, while the infotainment is stand-out.

The 15-inch central touchscreen dominates the minimalist cabin, controls all of the driving functions, the sat-nav, the semi-autonomous driver aids (which work well), and the multimedia; you can even play games when the car’s stationary, if that’s your thing.

On the move the steering is precise enough and the ride offers decent composure, so comfort is on par with some German executive saloon rivals. Yet the Tesla offers more in many key areas in this class, not least the cost of ownership, which is why it wins here.

The most affordable Model 3 is eligible for the £3,000 Government plug-in car grant for private buyers, plus just think how much you’ll save in energy costs by going electric. Strong range for plenty of usability, good refinement and the rock-solid charging infrastructure that Tesla has developed all add to the car’s appeal. 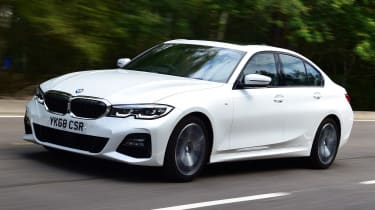 Of course, EVs aren’t for everyone. If you’d prefer a halfway-house plug-in, then you can buy the BMW 330e in saloon and estate form to dip your toe in the pool of electrification; or if you’d rather stick with conventional combustion engines, the 3 Series offers some great diesel and petrol units. On every version the fine chassis rides and handles beautifully. 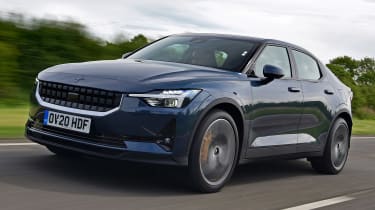 Polestar’s first full EV pushed the Tesla very close when we compared the two in a head-to-head test, with superb styling, lovely handling, solid performance and a good Google-based infotainment system. If the Tesla’s image isn’t for you, this is a great alternative premium electric car.