Form followed function when it came to the styling of the VW Up, with its slab sides, upright tail, steeply raked nose and wheel-at-each-corner stance allowing designers to maximise space inside the compact body. Yet the overall result was a surprisingly smart and classy-looking city car, so VW wisely decided not to mess with a winning formula for the 2016 update.

At the front you’ll spot the deeper front bumper with chunky black trim inserts, plus the addition of LED running lights that are set into the existing headlamp units. Move around to the rear of the car and you’ll discover the subtly redesigned tail-lamps that sit either side of the glass-clad tailgate that is a visual trademark of the Up.

The interior of the Up is simple yet high-quality and it can be specified with body-coloured panels. The piano-black finish on the steering wheel and dash also looks great, but it does reflect the light in sunny weather and can be a distraction. 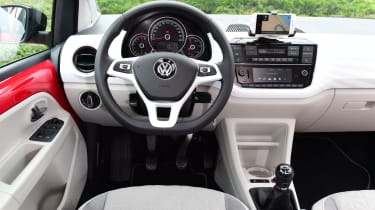 In addition, VW has introduced some customisation upgrades, allowing buyers to choose from a variety of bold dashboard finishes that contrast with the body-coloured trim inserts on the doors. In all other respects, the interior is identical to the old car’s, which means you get classy materials and solid build quality.

In front the display screen is just for displaying the radio and some other small functions, but it looks fantastic. It’s high-res and has a clean, classy look.

The up! uses a smartphone app to deliver sat-nav, as there’s no integrated unit available. However, it’s more sophisticated than the Renault Twingo’s standard app, with a slicker interface. You dock your smartphone in a cradle on top of the dash, while the free Maps+More app gives you access to sat-nav – which features traffic updates – and VW’s Think Blue Trainer to give you eco coaching on the move. As well as the narrow five-inch colour screen between the dials, the standard DAB and Bluetooth can be controlled through the app on your phone. 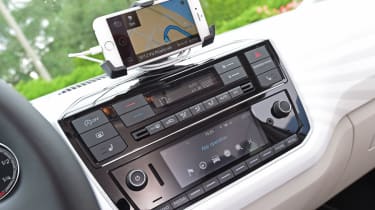 The system isn’t perfect, though. The app can often work slowly, and we found it didn’t respond well to destination entry. You can close the app and use Google Maps for sat-nav if you prefer, as the music, Bluetooth and other infotainment functions can be controlled through the regular dash-mounted buttons.

The up! beats also gets an upgraded 300w stereo with seven speakers, including a subwoofer in the boot and a digital sound processor. It’s a punchy system for a city car. This model also gets a choice of black or red finishes for its alloy wheel centre caps, door mirrors and bold body decals to mark it out from the rest of the range.