Is the sporty new Volvo V40 R-Design a match for the BMW M Sport and Audi S line models? 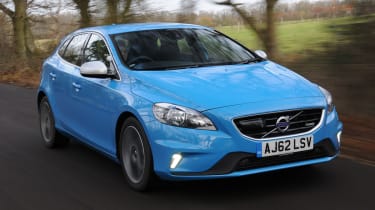 First things first, the V40 R Design definitely looks the part with expensive-looking trim inside and out and subtly enhanced bodywork. These changes add some attitude and should appeal to younger buyers, plus if you opt for the optional sports suspension, it will handle corners with more verve, too. But the V40 is still the most sensible member of the premium hatchback crop, so ultimately the fact that the R-Design retains the refinement, comfort and class-leading fuel-economy of the standard car is what will draw customers in.

Buyers want it all nowadays – sporty looks with rock bottom running costs, which is why factory-fit styling kits are becoming crucial for maximising profits. The BMW 1 Series is offered in M Sport trim, the Audi A3 is available as an S line and now Volvo has applied its R-Design treatment to the V40 range - and it expects 25 per cent of customers to take the bait.

In the past, the problem with sporty trim levels like this was that if you wanted the big wheels and bodykit, you got the backbreaking sports suspension as standard, but Volvo has sidestepped this mistake. You can order a sports chassis, which uses firmer spring and dampers and lowers the suspension by 10mm, but it's a £540 option.

What you do get for £2,300 more than the ES model on which it's based (or £4,050 for the R-Design Lux, which also adds xenon headlights, full leather seats, cruise control and keyless start) is an exterior design pack that includes a silk metal finish around the grille, the diffuser and on the wing mirrors. There's also a lower front bumper with vertical LED running lights, 17-inch wheels and the option of Rebel Blue paint for £275.

Inside, there's part-leather, part-suede sports seats embossed with the R-Design logo as standard, which are actually better-looking and grippier than the full-leather seats in our R-Design Lux test car. The rear seats are more sculpted, too, although there's still space for three back there if needs be. Another R-Design logo is applied to the steering wheel while an aluminium-effect stripe runs down the centre console. Add in the floating centre-console and illuminated glass gear lever, and it's a masterclass in tasteful Scandinavian design.

Every engine is offered as an R-Design model, right up to the 250bhp five-cylinder T5. The engine we drove though is by far the biggest seller - the 113bhp 1.6-litre D2, which accounts for a staggering 62 per cent of total V40 sales. With fuel economy of 78.5mpg and emissions of 94g/km, it's a massive hit with fleet buyers - so if R-Design kits are all about bringing sporty design to the masses, this is the model that defines the brand.

Our D2 test car wasn't fitted with the lowered sports suspension, but we did sample it in another model and were impressed by the results. You feel slightly closer to the road and the improved body control in a series of tight B-road turns is appreciable. It doesn’t ruin the ride either, although we suspect it would be a different story on the optional 18-inch wheels.

The standard chassis is still more than capable, though, and the D2 does itself proud. Getting up to speed is a bit of a struggle, but once up to cruising velocity the smooth in-gear acceleration is adequate. Compared to a BMW 1 Series it feels like the steering, clutch, brakes and throttle have been wrapped in cotton wool, detaching you from the experience, but Volvos have always been a more grown-up choice – forcing you to drive in a relaxed way.

Price is crucial though in this massively competitive segment, and the V40 fares well - costing around £550 less than the BMW 116d M Sport. But be careful as our test car was fitted with a host of options, including an electric drivers seat (£600), lane departure warning (£700) and a park assist system (£850), which took the total price to a less-palatable £27,820.