Given the chance of an extended holiday, most people would jet off to some exotic location. Not me. Instead I chose to drive 3,500 miles around Europe. For a road tester, this is a busman's holiday - but I wouldn't have it any other way. 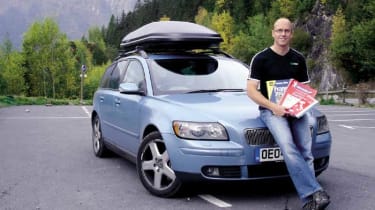 Given the chance of an extended holiday, most people would jet off to some exotic location. Not me. Instead I chose to drive 3,500 miles around Europe. For a road tester, this is a busman's holiday - but I wouldn't have it any other way. Besides, it gave us the perfect opportunity to put our long-term Volvo V50 to the sternest possible test. Loaded up with so much baby kit that we needed to attach a roofbox, the car became our snail-like home for more than three weeks as we journeyed through France, Italy and the Alps.

Before we left, though, the V50 did make an unscheduled visit to the Squire Furneaux servicing centre in High Wycombe, Berks. Nothing serious, but you may remember the squeaky clutch pedal we mentioned in the first report (Issue 823). Not wanting to put up with the annoying noise over a long distance, we decided to get it seen to. Within 30 minutes, the mechanics had sourced and solved the problem - caused by the clutch rod rubbing where it passes through the bulkhead.

After a quick garage stop to adjust the tyre pressures to cope with the weight of all our clobber, the Volvo was ready for its first trip overseas. Needless to say, raising the pressures by 4psi had a detrimental effect on the ride quality - not the T5's strongest suit anyway. However, with the car loaded, much of the harshness was removed.

Once off the ferry and in France, we were reminded of what a great cruiser the V50 is. For starters, it proved very economical - 28.4mpg over the course of 11 tanks of fuel is impressive for a turbocharged 220bhp car with a roofbox attached. This meant one fill-up lasted more than 330 miles.

And had my wife and I not needed to stop to attend to baby Sasha's needs, we'd have happily stayed put until the tank ran dry. The seats, driving position, gearchange and refinement are all excellent, making the Volvo very conducive to long trips. When friends joined us in France, the V50 proved so quiet it quickly sent two babies to sleep.

In fact, our only gripes were the lack of an off-clutch rest in the narrow footwell, and the small door pockets - although my phone and wallet slotted in neatly. The space behind the floating centre console also came into its own, providing a home for the logbook and a sunglasses case.

One thing to admit, though. The atlases in the main shot are somewhat misleading - we didn't often have to resort to them thanks to the excellence of the Road Traffic Information (RTI) system. It is an expensive option at £2,500, but it really is the most logical and comprehensive set-up we've found in any car - not least because the simple controls are mounted on the back of the steering wheel, so there's no random prodding at buttons on the centre console. However, we did notice a few curious anomalies. In France, the system worked superbly, warning of hold-ups and roadworks, and suggesting diversions - something it has never done in the UK. However, it was at its worst in Italy. Whoever programmed the DVD mapping disc obviously decided not to bother including much of the minor road network.

It wasn't only from a driving point of view that the V50 proved a hit, either. Spending part of our holiday at the beach inevitably meant getting sand in the boot - allowing the reversible load mat to come into its own. With the plastic side up, all you need to do is pull the mat out and shake it off.

All things considered, I can't think of many other cars that would have coped so well - certainly not in this price bracket, anyway. Our Volvo can rightly claim to have earned its touring stripes.