Once again, Volvo proves it has what it takes to take on its premium rivals with another super-stylish, tech-packed model. The V60 takes a more relaxed and refined approach than German compact-execs. It may not quite match their interior quality, but it’s a hugely tempting package nonetheless that could well be easier to live with every day.

It’s fair to say that Volvo can now officially be spoken about in the same breath as Audi, BMW and Mercedes. Led by its excellent SUV range and backed up by the S90 saloon and V90 estate, the Swedish brand now has the style and substance to go toe-to-toe with any of its premium rivals.

And now it has a genuine compact executive contender in the V60 – albeit only in estate form for the time being; an S60 saloon will follow later in the year. So, would we take it over one of its established German rivals?

The V60 is a handsome car, very similar to the bigger V90 in terms of proportion but 180mm shorter and with enough detail differences to avoid any Audi ‘Russian doll’ comparisons. The now familiar ‘Thor’s Hammer’ front LEDs and wraparound taillights are pure Volvo, but with some curvier lines along the flank. 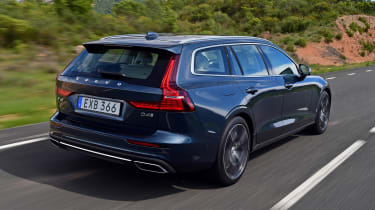 Inside, the useful 529-litre boot (rising to 1,441 litres with the rear seats folded flat – a process that couldn’t be easier) is bigger than any of its German challengers, while knee room in the back is also claimed to be best in class.

Sure enough, a six-foot passenger can sit behind a six-foot driver with room to spare, although there’s not a huge amount of space for feet if the front seat is in its lowest setting. The transmission tunnel will further restrict space if someone is in the middle seat.

As with other recent Volvo models, the interior takes a refreshingly different approach to rivals. Quality is good – not quite up to the exalted standards of the Germans’, but not far off – while the design is all about Scandinavian cool. 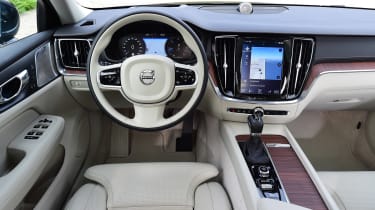 Tech is a strong point. As well as the standard 9.3-inch portrait touchscreen that dominates the centre of the dash, there’s a digital instrument display, all the latest smartphone integration, a raft of impressive safety kit, and Volvo’s useful Pilot Assist semi-autonomous driving system – updated for the V60. However, catching up fast with what the Germans do, much of the best kit is reserved for the options list.

As with the 90-series cars (as well as the latest XC60), the V60 sits on Volvo’s Scalable Product Architecture (SPA) platform. That means 2.0-litre four-cylinder petrol and diesel engines, plus the potential for two plug-in hybrid models that should eventually arrive in the UK.

Our first V60 experience comes courtesy of the higher-powered 188bhp D4 diesel model in top-of-the-line Inscription spec. At launch buyers will also be offered a 148bhp D3 diesel, and a 247bhp T5 petrol. When the hybrids turn up, four-wheel drive will join the range, too, as well as a Cross Country model with a touch of SUV style. Basic cars will be badged Momentum, while sportier R-Design will also feature – alongside Pro versions of each with a little more kit.

Volvo may claim that the V60 is its most dynamic car yet, but Volvo’s definition of dynamism differs to others’. This isn’t a car you’ll enjoy throwing around – it’s capable if not rewarding. It is impressively comfortable, though, even on our car’s optional 19-inch wheels. It’s quieter than rival diesels, too. 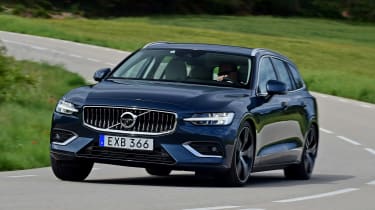 The steering is direct enough, if lacking feel, with the addition of extra weight if you delve into the sportier settings in the Drive Mode menus. You can also sharpen up the throttle response if you really want to, but in our view, the V60 is best left in Comfort with the gear lever in ‘D’. There are no paddles behind the steering wheel to play with, but you can select ratios manually via the lever if you like. Alternatively, just sit back, enjoy the cruise and connect the Pilot Assist for a bit of added relaxation. Of course, as in other Volvo models, you still need to be in complete control, holding the steering wheel at all times.

If you do feel a bit of enthusiasm building, the V60 will corner tidily with good grip and not much body roll, while the brakes feel strong and progressive. Performance from the D4’s engine is good, too, with 0-62mph and economy figures pretty much on par with Audi’s equivalent A4 Avant.

Volvo folk fully expect the V60 to outsell its saloon equivalent in Europe and we can believe them. It’ll be an interesting comparison when we get to pitch it against its German rivals in the UK, but on this first showing, it looks like Volvo could well have yet another hit on its hands.