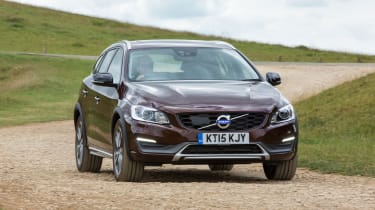 For those in the market for a premium estate car with all-year round driving abilities and a jacked-up ride height for light off-roading, the V60 Cross Country is an interesting choice. We’d opt for the all-wheel-drive model over entry-level front-wheel-drive versions, even though it’s more costly to run, as it simply makes more sense. But buyers will have to be committed to buying into Volvo’s posh Cross Country badge, because the SEAT Leon X-Perience offers a similar proposition – albeit with a less premium badge - for around £10,000 less.

And yet Volvo is arguably muddying the waters with its ‘Cross Country’ sub-brand. This effectively creates three pillars in each cluster, joining the standard cars and sporty R-Designs, with the Cross Country models being a stepping stone to the full-on XCs.

The Cross Country name debuted on 1997’s V70, but was largely dormant until 2013 when it was revived for the V40 Cross Country – an SUV-lookalike family hatch. The Cross Country range now grows from one to three models with S60 and V60 versions; we drove the S60 saloon previously, and now we’ve hit the road in the estate. 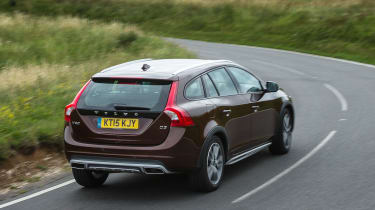 To allow the Cross Country to tackle more rugged terrain than other V60s, Volvo has jacked up the standard car’s suspension by 65mm and added a raft of typically off-road body jewellery. So at the front there is the usual silver-coloured scuff plate, honeycomb front grille and black plastic wheelarch mouldings. Along the sides are a pair of extra scuff plates, while at the back is, you guessed it, another scuff plate.

Unsurprisingly, Volvo is predicting British buyers will drift towards the V60 rather than the oddball S60 Cross Country, so there’s a wider trim selection available. Standard SE models, starting at £30,195, get cruise control, 17-inch alloys, roof rails, Bluetooth, climate control and autonomous braking, while Lux versions, priced from £32,945, add leather seats and smart TFT dials. For an extra £800, each trim level can also be upgraded to a Nav model adding sat-nav and Internet connectivity. 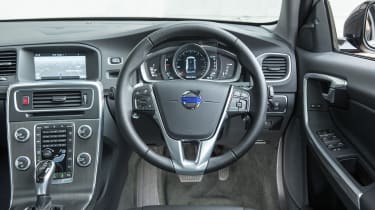 Compared to the niche S60 Cross Country, the V60 also gets a better engine selection. Entry-level cars come as standard in front-wheel drive, reducing year-round driving ability, but the pay-off is they get Volvo’s new range of super-eco Drive-E diesels. There are 148bhp D3 and 188bhp D4 variants – both 2.0-litre, four-cylinder diesels that, when hooked up to the six-speed manual box, emit just 111g/km and return 67.3mpg. Prefer an automatic? There’s a new eight-speed auto for an extra £1,550, claiming 120g/km and 61.4mpg.

We drove the car that has the skills to match its go-anywhere looks. The range-topping D4 AWD version (only available with a six-speed auto) is fitted with Volvo’s trusty 2.4-litre diesel, and its charming five-cylinder growl and hefty 400Nm of torque make for decent acceleration and refined cruising ability.

As it’s four-wheel drive, it’s capable of a bit of green-laning, too. In normal driving, it runs in front-wheel-drive mode, but it can switch to four-wheel drive in slippery conditions, and there’s hill descent control, too. The downside is it’ll hit your pocket more – fuel consumption stands at a disappointing 49.6mpg and CO2 emissions of 149g/km mean it costs an extra £115 a year to tax. 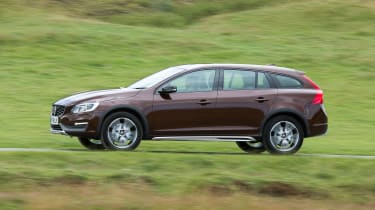 The all-wheel-drive V60 Cross Country drives better than the front-driven S60 we tried in Issue 1,382 – its extra weight and grip give more balanced handling. That said, the rugged estate still suffers from the standard V60’s numb steering and brake pedal feel, although the extra ride height makes for far more comfortable progress.

In other respects, the Cross Country is unchanged over a standard V60, so there’s a 430-litre boot, expanding to 1,241 litres with the rear seats folded. But that stylish curving roofline eats into space; a BMW 3 Series offers an extra 65 and 259 litres.