The XC40 majors on comfort and refinement instead of entertainment, and it does so rather well

The XC90 and XC60 are both based on Volvo’s Scalable Product Architecture (SPA) platform, but the XC40 is the first model from the Swedish brand to sit on the Compact Modular Architecture (CMA) underpinnings. This uses MacPherson strut suspension at the front and a multi-link rear axle, which means the new Volvo matches its German rivals for chassis technology under the skin. However, if you’re looking for dynamic sparkle and hot hatchback-rivalling agility down a country road, you’ll be better off elsewhere.

For everyone else, though, the XC40 strikes a nice balance between composure and comfort. It can get caught out on pockmarked city streets, particularly at low speeds and on the optional larger wheels - but provided you stick with the original items, you’re likely to find the baby Volvo a pretty relaxing place to spend time. This isn’t just down to ride quality, of course, because the engines do a good job of fading into the background too. 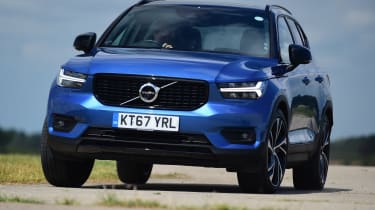 The engine does its best work between 1,500rpm and 3,000rpm, and the eight-speed auto is keen to shift up just before the higher of those figures. It’s nicely judged, really, because that’s also the point where the motor really identifies itself as a diesel, through a harsher note and increased volume.

It’s worth remembering, though, that should you want to get more involved in the gearshifting process, you’ll only be able to spec steering wheel-mounted shift paddles on R-Design editions of the car. And this restriction is compounded by the fact that the stubby gear selector between the front seats actually has a lateral shift pattern - pull it towards the driver to shift down, and push it towards the passenger to shift up. It’s a bizarre layout that will take even the most adaptable of drivers a long time to get used to.

Even on those optional wheels, at high speeds the XC40 does a good job of soaking up road imperfections. You’ll occasionally notice a slight floating effect, but it never strays to the point of making you seasick. Its trickiest moments come at low speeds around town, where you might find the car troubled by deep potholes. Then again, we’d expect a standard Momentum on 18-inch wheels to demonstrate a bit more compliance in this regard.

The XC40 has a mix of full electric, hybrid and turbocharged petrol engine options – with some petrol models having been refreshed in 2019 to offer more power and improved economy. The range starts with the T2 three-cylinder petrol, producing 127bhp. The 161bhp T3 (up from 154bhp previously) is now available with both manual and automatic gearboxes. All T3 models are front-wheel drive. 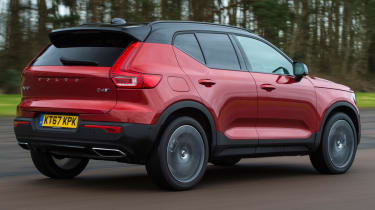 Step up to the mild-hybrid B4 and B5 (194bhp and 247bhp) and you’re restricted to Volvo’s eight-speed auto transmission; the former can be had with a choice of front- or all-wheel drive, while the B5 is all-wheel drive only.

The Recharge plug-in hybrid T5 model is powered by a 1.5-litre three-cylinder mated to an electric motor. It’s an impressive unit -  with all that battery assistance, the three-cylinder motor feels like it lives a relatively unstrained life, but it’s capable of a proper turn of pace. Volvo’s claimed 7.3-second 0-62mph time points to solid performance, owing to the strong reserves of torque the XC40 Recharge can muster, and it does it with so much refinement too.

Volvo has also added the 402bhp P8 pure electric Recharge model to the range. It makes use of two electric motors powered by a 78kWh battery and is capable of 0-62mph in a claimed 4.9 seconds. A full battery should provide a 248-mile range.