Ballpark fuel efficiency, with respectable CO2, but the real gains come with the Recharge plug-in hybrid and pure-electric versions

The XC40’s engine line-up comprises state-of-the-art motors, with a wide range of electric, hybrid, petrol and diesel engines. The efficiency figures on the XC40 are respectable for the class, but no better than that.

As you might expect, the standard petrol XC40 takes a hit on fuel efficiency and CO2 emissions; at 158g/km in entry Momentum trim, the T3 probably has a big enough tax hit for lots of company car choosers to overlook it. In reality, it’s a very thirsty unit, too - we struggled to get mid-thirties mpg out of the T3 in our time behind the wheel. The front-wheel drive B4 with mild-hybrid tech offers greater performance than the T3, and the same returns in real world economy.

Insurance groups for the XC40 range from Group 18 to Group 32. On a like-for-like basis, the Volvo is ranked slightly lower than its German rivals - not least helped because of the Swedish brand’s reputation for passive and active safety systems. 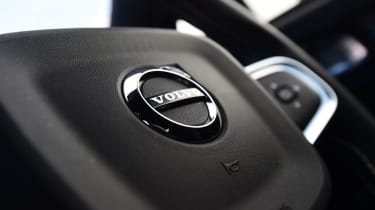 Volvo is currently on the crest of wave in terms of customer demand, and when you also factor in the strong desirability within the premium SUV market, and it's no surprise that the XC40 has some of the best residual values of any new car on sale, ranging from 55-59%. In comparison, the BMW X1 has residuals around 10% lower than this.