The new Volvo XC90 B5 replaces the outgoing D5 diesel, but is the new mild-hybrid powertrain any good? We took it for a drive to find out... 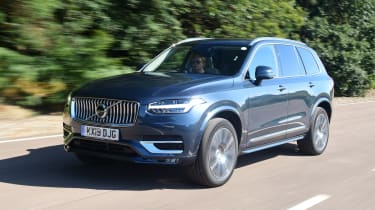 The new B5 diesel picks up right where the D5 left off. It cements its place as our powertrain of choice in the still-superb Volvo XC90; only marginally more expensive than before, the tech brings welcome fuel economy boons and should still occupy a space on your shopping list if you’re after a large premium SUV. Just be sure you buy the correct one – confusingly, one of the upcoming mild-hybrid petrol models will be badged B5 as well.

Four years ago, we named the second-generation Volvo XC90 not just the best Large Premium SUV on the market, but our overall Car of the Year for 2015.

While Volvo’s range-topper hasn’t repeated the feat in subsequent years due to a raft of talented newcomers, it still ranks as a hugely desirable, plush and premium SUV. Perhaps that’s why the car’s recent ‘facelift’ was so minor on the surface; why change a winning recipe?

Still, regardless of how much we like the XC90, the firm has commitments of its own that it must make its Audi Q7 and BMW X5 rival confirm to. As a company, Volvo wants to electrify its cars sooner and quicker than most, hence the sudden arrival of an overhauled engine line-up with mild-hybrid technology playing a key role. 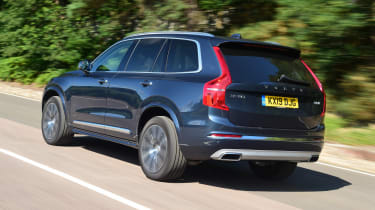 The new, B-badged MHEV engines are intended to become the default powertrains, and in the case of D-badged diesel versions of the XC90 it’s already happened. This new B5 (D) replaces the outgoing D5.

The mild-hybrid system recuperates energy lost under braking thanks to an all-new brake-by-wire setup. This energy is then deployed to assist the combustion engine under acceleration, reducing the amount of work the 2.0-litre turbocharged four-cylinder diesel has to do to get the car’s 2,185kg kerbweight up to speed. Power and torque are up slightly, as is the price, by around several hundred pounds depending on which trim you opt for.

Importantly though, fuel economy also improves. According to the XC90’s new WLTP-recorded figures you can expect three or four miles per gallon more from the B5 mild-hybrid setup. Minimise weight and go for the smallest wheels, and Volvo claims 44.1mpg is possible. Company car buyers won’t feel a huge benefit though, given the B5 still commands the 37 per cent Benefit in Kind tax rate.

Toggling Eco mode ushers in the ability to coast by lifting off the throttle above 40mph, but in reality the B5 feels almost exactly the same as the D5 to drive. Though it’s one of the more junior members of the XC90’s engine line-up, it offers all the power most buyers would ever need. The healthy 480Nm of torque is more than enough to move the mass comfortably, and at a cruise it’s quiet; hushed further still while coasting.

The steering is limp and lifeless but this really isn’t a car you’ll want to drive in a hurry. The Dynamic mode on the drive selector seems totally irrelevant. Instead, it’s an imperious cruiser. Tick the £2,100 box marked Active Four-C Chassis on the options list and the standard steel spring suspension is replaced by an air set-up with adaptive dampers, elevating ride quality to simply sumptuous levels.

The integration of the 48-volt system nips away at practicality a little, but boot space still stands at a huge 680 litres with five seats in place. As ever, all cars irrespective of trim level feature seven seats and a full leather interior as standard, and four years into its life the XC90 still impresses with its level of quality and the amount of space on offer. It’s a seriously comfortable machine, and a refreshing alternative to the harder, sportier image projected by its German rivals. 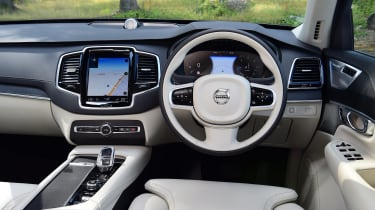 Every car gets a pinpoint sharp nine-inch infotainment screen, sat-nav, digital dials, adaptive cruise control and a plethora of safety systems as standard, too, while Inscription models like ours pile on the creature comforts. The regular leather is replaced by softer Nappa leather, while the front seats gain multi-directional lumbar support and the back row features window blinds.

To inject additional technology and features, you’ll need to ignore the Momentum, R-Design and Inscription trim structure and instead opt for one of the Pro variants of these models. These gain air suspension as standard, alongside which you’ll find in the optional Winter pack – adding heated steering wheel, washer nozzles, windscreen, a headlight cleaning system and a head-up display.

However, these models aren’t fully inclusive – some small ticket items like Apple CarPlay you’ll still have to pay for, either by optioning alone or by selecting one of six encompassing packages. It’s not an entirely straightforward line-up, and you’ll have to do some maths to work out the best way of getting what equipment you want for the best price.