Never underestimate how much clobber a baby needs. That was the advice my wife Penny and I received from friends with little ones of their own. From buggies to cots, toys to clothes, nappies to bottles, the stuff you can't leave home without is endless. Travelling anywhere could be a nightmare. But the Marriages' path into parenthood has been eased significantly by our long-term Volvo XC90. 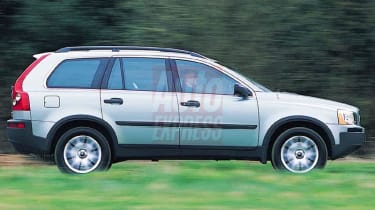 Never underestimate how much clobber a baby needs. That was the advice my wife Penny and I received from friends with little ones of their own. From buggies to cots, toys to clothes, nappies to bottles, the stuff you can't leave home without is endless. Travelling anywhere could be a nightmare. But the Marriages' path into parenthood has been eased significantly by our long-term Volvo XC90.

Not a day goes by that I'm not grateful for the car's practical attributes. And I'm not alone - its logbook is full of praise for the individually sliding rear seats, split tailgate and built-in child's booster cushion. This popularity, plus excellent refinement, a luxurious interior and diesel power, has made the off-roader great for long trips. Wind noise is reduced to a murmur by double-glazed front windows, the seats are brilliant, as is the clear cabin layout, and derv is cheap on the Continent.

So after a family Christmas trip to the French Alps, it was back to work - which meant taking the XC90 to the Geneva Motor Show at the start of March. Before I left for Switzerland, I bought a set of snowchains - nowhere in France seems to stock them big enough for the Volvo's massive 235/60 R18 tyres. And although the accessories came in useful on several occasions, at £140 from a main dealer they're not exactly cheap.

But this pales into insignificance compared to the most expensive option we specified on our £32,400 D5 SE. At £3,200, the Communications pack cost a fortune. We haven't used the built-in phone much, but the sat-nav is accurate, easy to use (thanks to steering wheel buttons and a separate remote) and covers the whole of Europe. Knowing the Volvo would do a lot of miles, we also went for the £2,500 rear screen DVD system, with wireless headphones.

This has been a hit, but the twin monitors don't always fire up immediately. That isn't our only gripe. The rear screen washer packed up, the trip reading resets itself randomly and there's been a squeak in the boot since day one.

With all these journeys, the XC90 reached the 12,000-mile mark for its first service in only four months, and the faults were reported to my local dealer, Squire Furneaux of High Wycombe, Bucks. Most of the work was done in an hour and a half, including fitting a new fuse to fix the rear washer jet and curing the DVD screens and trip readout.

However, tracking down the boot rattle was a two-hour job. It was traced to the lower tailgate hinges, which were lubricated. But a few hundred miles later, the noise returned. The helpful dealer wants the car back to fix this once and for all - but then for £253.68, you expect good service. We also wanted to see if the work had improved the economy, which had settled at 26.5mpg. In the 1,500 miles since its check-up, the car has returned 28.8mpg, so it clearly has - although we'll soon be back for some new tyres soon if the miles continue to pile up. Yet costs aside, the Volvo gives great peace of mind as a family wagon - and certainly provides a home away from home for baby Sasha.