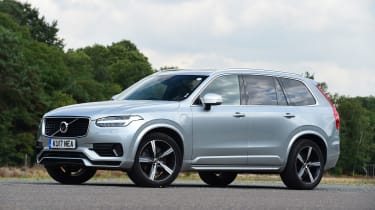 When Volvo introduced the original XC90 in 2002, it created the seven-seat SUV and it went down a storm; the company couldn’t build the first XC90 fast enough.

However, Volvo kept that first super-sized SUV on sale for more than a decade, by which time it was hopelessly outclassed. So when the second-generation XC90 was unveiled in 2014 it was overdue – and most definitely worth waiting for.

Built on a new platform, the XC90 Mk2 is still a seven-seat SUV and, as you’d expect of a Volvo, it offers all of the latest safety and comfort features to make seven-up cruising a breeze. Once again, the XC90 has been a great success as a new buy – but how does it stack up as a used one?

Orders for the XC90 Mk2 opened in December 2014, with buyers able to choose between 222bhp D5 diesel, 315bhp T6 petrol or 401bhp T8 Twin Engine plug-in petrol-electric hybrid powertrains; the last of these had an official CO2 emission figure of just 49g/km. 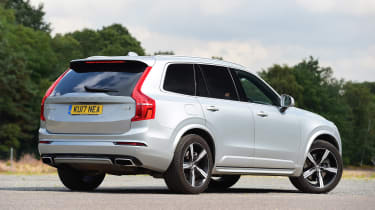 Initially there were two trims – Momentum and Inscription – but in November 2015 an R-Design grade was introduced to sit in the middle of the range. From February 2016, all XC90s featured Pilot Assist II, a suite of driver assistance systems, then in August 2018 a 245bhp T5 petrol engine was added to the range. As with all of the older engines, the T5 came with an eight-speed automatic transmission. Updates in September 2019 brought a refreshed nose design, extra colours and a B5 diesel mild-hybrid powertrain option.

All trim levels have been offered with all powertrains, and every XC90 comes with an auto gearbox and four-wheel-drive.

The D5 diesel along with the B5 and T8 hybrids make sense from the perspective of running costs, while the T5 and T6 petrol models are thirsty.

To this, the T8 adds a 12.3-inch screen, four-zone climate control and third-row air-con, plus an opening panoramic sunroof. Over Momentum, the R-Design features a sportier design inside and out, sports seats and privacy glass, while the Inscription has Nappa leather, 20-inch alloys, extra cabin illumination and a 12.3-inch display.

Alternatives to the Volvo XC90

There are plenty of full-sized SUVs to consider, with the Jeep Grand Cherokee suitable for anybody wanting to go off-roading at least occasionally.

For those who want a car that focuses on dynamics, the Range Rover Sport and Porsche Cayenne might suit, but all three of these cars only have seating for five people. If you need an extra pair of chairs the Land Rover Discovery might work, especially if you want to do some green laning.

Also on your list should be the Audi Q7 and BMW X5; these have great engines and excellent build quality, with user-friendly interiors. If neither of those grabs you, think about the Mercedes GLS, which offers the same traits as the Audi and BMW.

The average XC90 owner rating on our sister title Carbuyer.co.uk is 3.2 out of five, with electronics glitches all too common.

First Edition models are worth seeking out, with air suspension, leather upholstery and a Bowers & Wilkins audio system.

The 2019 facelift included a bigger battery for the XC90 T8, increasing EV range from 21 miles to a slightly better 28 miles.

If a T8 hesitates as it’s pulling away, the electric motor on the rear axle might be failing. Repairs cost in excess of £3,000, so avoid any cars that do this. 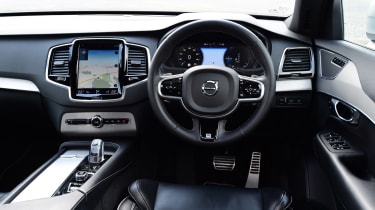 The Volvo XC90’s cabin is a real highlight, with plenty of premium materials everywhere. R-Design models get sport seats, while Inscription spec cars have Nappa leather upholstery. However, the tablet-style display is not as intuitive as it should be.

Space is great for everyone in the first two rows; the third row is fine for adults if the middle seats are slid forwards. Predictably for a large SUV, boot space is impressive with up to 1,856 litres available with rows two and three folded down.

Check out the latest used prices for the Volvo XC90 on our sister site Buyacar.

All Volvo XC90s need to be serviced every 12 months or 18,000 miles (whichever comes first), with the T8 model significantly cheaper to maintain than the alternatives.

Disappointingly the XC90 Mk2 has been recalled 14 times already, with the first campaign launched in June 2015 because of side airbag failures.

Since then there have been a further three recalls issued because of airbag problems, as well as two campaigns because of seatbelt glitches.

Recalls have also been issued for damaged power steering hoses leading to a loss of assistance, engine failures because of faulty crankshafts and fuel leaks because of cracks forming in a rubber hose.

Other potential faults include leaks because of coolant hose damage, the engine’s plastic inlet manifold melting and incorrect software leading to reduced power from the engine or the auto emergency braking system not working (two separate recalls).

The XC90 hasn’t appeared in any of our new or used Driver Power surveys, but Volvo notched up a 10th place (out of 30) in the 2020 survey of brands, which is an improvement on the 13th place that it managed in 2019. Owners like Volvo’s interior design, safety features, infotainment and connectivity, build quality and practicality – but not the handling, poor fuel economy or high running costs.

We like the XC90 so much that in 2016 it scooped Best Large SUV in our 2016 New Car Awards. The previous year it had done exactly the same thing, while also being named as our overall Car of the Year. We said: “We’ve been waiting a long time for the XC90, and it was well worth the wait – it’s a sensational SUV. It not only sets new standards for Volvo, but for the car market in terms of technology, efficiency, style and safety. It’s also got an element of style that you might not have expected. If the XC90 points the way for the future of Volvo, the future looks very bright indeed”. The XC90’s appeal hasn’t lessened since.