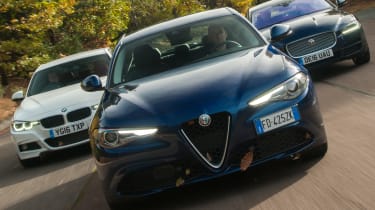 Alfa Romeo used to rule the roost in the world of desirable sports saloons, but it’s lost its way of late. A switch to front-wheel drive in the nineties alienated a lot of fans, while patchy reliability and inconsistent quality drove many more towards upmarket German rivals.

The brand’s last attempt to crack the compact executive sector was the lacklustre 159, which was quietly axed in 2011. But now Alfa is back with a bang, and the all-new Giulia promises to put it at the top of the class. Sleek looks, a classy interior and a return to rear-wheel drive all appeal, while low emissions and attractive prices should tempt business users.

Before Alfa cracks open the champagne, though, the Giulia must see off a pair of seriously talented rivals. The Jaguar XE is our current class favourite, mixing engaging driving dynamics, handsome looks and a smart cabin with low running costs, while the BMW 3 Series still sets the standard in this sector for driving fun, solid build quality and everyday usability. Does the new Alfa do enough to crush its compact executive rivals? 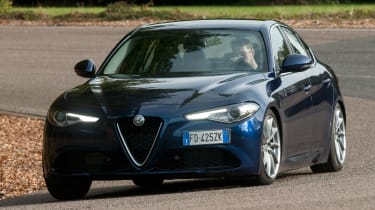 The Alfa Romeo Giulia is the brand’s first compact executive model for five years, following the demise of the 159 in 2011.

From launch the newcomer is available as a four-door saloon only, with a choice of standard, Super and Speciale trim levels. Engines are limited to a 2.2-litre diesel with either 148bhp or 178bhp, plus a 2.0-litre 197bhp turbo petrol. At the top of the range is the firebreathing Quadrifoglio, with its 503bhp 2.9-litre V6. However, here we test the £34,150 2.2D Speciale, and our car is an early left-hand-drive Italian model.

Tester's Notes: "There are some lovely details on the Giulia. For example, the thin-rimmed three-spoke steering wheel is perfectly contoured for your hands and covered in soft-touch leather." 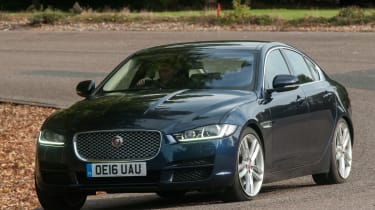 Jaguar was a relative latecomer to the compact executive party, but its XE scooped the honours in this class for the second consecutive year at our 2016 New Car Awards.

There’s a wide range of engine and trim variants, and here we test the 178bhp 2.0-litre diesel auto in £34,775 R-Sport guise – although the car in our pictures is a flagship Portfolio AWD.

Tester's Notes: "If you’re looking to cut your company car costs, it’s worth considering the 161bhp 2.0-litre diesel. With emissions of 99g/km it drops into the 19 per cent tax bracket.” 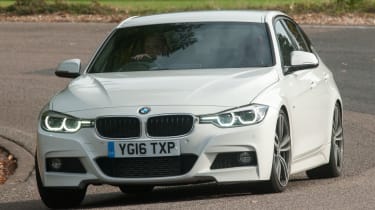 The BMW 3 Series has been a hugely successful part of the firm’s line-up for more than 40 years, and a refresh last year kept it in contention for class honours. Here we test the ever-popular 320d in £34,460 M Sport auto guise.

Tester's Notes: "The EfficientDynamics Plus auto costs £32,220 and emits 99g/km of CO2, which results in an annual Benefit in Kind bill for higher-rate earners of £2,455." 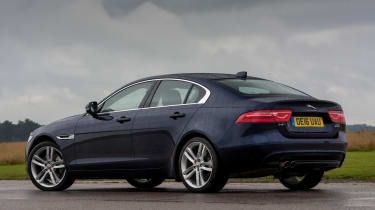 It’s another win for the XE, which continues to show its class in the compact executive sector. Sleek looks, a cosseting cabin and engaging driving experience come as standard, while the R-Sport brings just enough racy aggression. It’s not quite as spacious as its rivals here, but the Jag offsets this small disadvantage with wallet-friendly running costs and plenty of standard equipment. 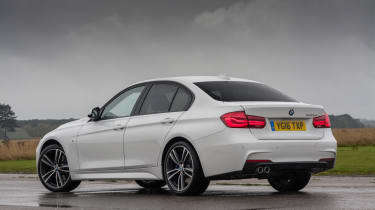 The evergreen 3 Series has to play second fiddle to the overall appeal of the Jag, but for pure driving thrills it remains unrivalled. The BMW is also beautifully finished, features an excellent infotainment system and boasts just enough space to accommodate most families. It’s let down here by its higher CO2 emissions and slightly stingy kit list. 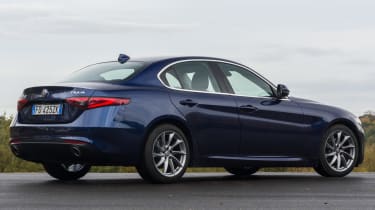 It was a tough call, but the Giulia just misses out on the runner-up spot. Alfa shouldn’t be disappointed with this result, because this head-turning, roomy and quick car deserves to be mentioned in the same breath as its rivals here. It’s also cost effective to run and good to drive. It’s just not quite as engaging as its rivals and is let down by its firm ride and poor infotainment system.