The addition of four-wheel drive adds security to the Jaguar XE, but is it offset by the extra cost and drop in efficiency? 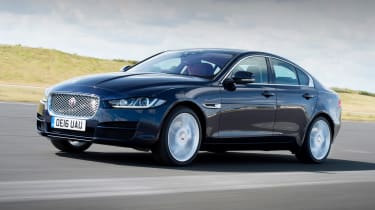 Adding four-wheel drive to the XE doesn’t transform the way it drives, but it certainly feels more surefooted in adverse conditions. We’re not totally convinced that outweighs the efficiency drop, however, while the £1,800 extra that an AWD model asks could be better spent on the excellent new infotainment upgrade. All that aside, this is still a likeable and stylish small saloon that’s great to drive.

Jaguar’s XE has been on sale for over a year, and it’s won praise left, right and centre – not least from Auto Express, as we’ve crowned it Best Compact Executive Car at our New Car Awards in 2015 and 2016.

Now Jaguar has drafted in new features to help keep the saloon on top of its game – chief among which is the option of four-wheel drive. The extra pair of driven wheels adds £1,800 to the price of the 178bhp 2.0-litre diesel variant. Being a modern- day Jaguar, the intelligent four-wheel-drive system is derived from the F-Type AWD and can shift torque between the axles quickly when it detects a loss of grip. But most of the time, the XE stays as rear-wheel drive. 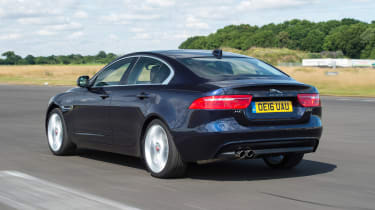 Push it hard in wet conditions and you can detect the system subtly shuffling drive to the front wheels, helping it to feel more planted in corners. Most will struggle to feel any difference behind the wheel, though.

The XE AWD is not only more expensive to buy, but also more costly to run. Claimed fuel economy drops from 67.3mpg to 60.6mpg, while company car buyers will be most put off by the rise in CO2 emissions from 109g/km to 123g/km. One of the reasons is that the XE AWD is 50kg heavier than a front-wheel-drive model – not that you’ll notice the extra weight on the road.

The additions to the 2016 XE don’t stop with the four-wheel-drive system, though. New options include a fantastic Meridian sound system and some extra active safety features, including lane keep assist and a tiredness monitor.

And at long last, Jaguar finally offers buyers the option of the larger 10.2-inch InControl Touch Pro infotainment system found in the F-Pace. It’s vastly improved on the standard eight-inch system, not just in size and look, but also in the way it operates. 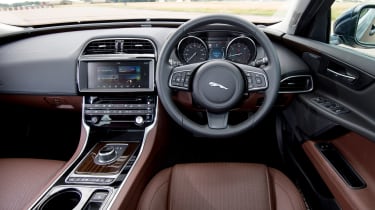 The screen itself is more crisp and responsive, and the menus, maps and features all operate with the slickness that you’d expect of a car at this price point. It also brings extra connectivity features including a Wi-Fi hotspot and intelligent navigation. It’s not a cheap option, at £1,530 with the surround sound system, but it’s worth it if you intend to use the tech every day.