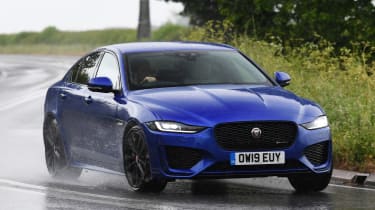 With handsome looks, a smart cabin and some brilliant in-car tech, the updated Jaguar XE is arguably the most desirable car in its class. It’s certainly still one of the best to drive; the latest BMW 3 Series just edges it on agility, and the German car has a bigger advantage when it comes to engines, too, but as an overall package there’s little in it.

This is the refreshed Jaguar XE. There was much to like about the brand’s first compact exec since the X-Type, but as the model nears its fourth birthday it’s been overhauled in several crucial areas. This is our first chance to try the car in the UK.

With these 2019 updates, Jaguar focused primarily on one thing that matters most in an image-conscious class: in-car tech. All of the old touchscreens have been binned and replaced with the latest Touch Pro Duo set-up.

The result looks prettier and feels more hi-tech than any BMW or Audi at this price. Lifted from the I-Pace, Touch Pro Duo consists of three displays. There’s a 12.3-inch digital instrument panel, a central 10.2-inch infotainment touchscreen with Apple CarPlay and Android Auto, and a smaller touchscreen below it for climate and seat functions. 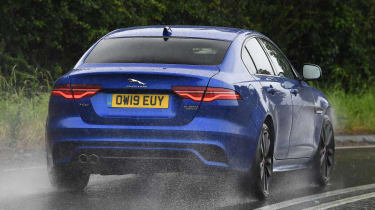 The XE also gets a digital rear-view mirror. This gives a clearer view than looking through the rear privacy glass and a wider field of vision, reducing blind spots. The rest of the cabin hasn’t changed much, but the quality of materials has improved. The new steering wheel looks gorgeous and is great to hold, while the rising rotary gear selector has been ditched for a ‘pistol grip’ lever.

Still, none of the qualities that made the XE so capable on the road has been fiddled with. The suspension can still round off the nastiest of bumps with brilliant composure (even on this test car’s £900 optional 19-inch alloy wheels) yet deliver sharp handling. The Jaguar doesn’t quite corner with the BMW 3 Series’ ability, but it counters with much nicer steering weight and response.

We sampled the four-cylinder Ingenium diesel, and while its 178bhp and 430Nm of torque are on par with the BMW 320d’s motor, the Jaguar is much slower in the real world. The BMW is more refined, too. As with other XE engines, the diesel is mated to an eight-speed ZF box. This is smooth, easy to live with and can be overridden with a lovely set of metal gearshift paddles. 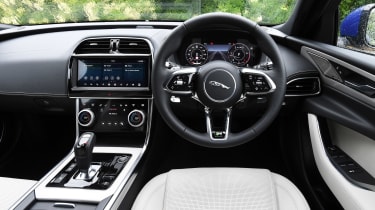 Our car came equipped with all-wheel drive, but this doesn’t really offer any benefit with a modestly powerful diesel engine. We’d save the £1,860 (and more, thanks to better fuel economy) and get a quicker rear-driven model instead.

In addition to the various improvements throughout the car, the XE is now a little cheaper to buy. Comparing a PCP quote on this R Dynamic SE with the equivalent Audi A4 S line quattro with a 187bhp diesel and auto box, on equivalent terms and deposits, the Jaguar costs only about £5 per month more across a three-year period.