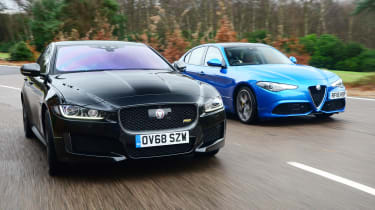 The Jaguar XE sat at the top of the compact executive class until recently, thanks in part to its fine handling and comfortable ride. But unlike many models in this sector, the XE was missing a range-topping performance version, after the punchy V6-engined S was discontinued because of changes to emissions regulations.

So now the British brand has launched this, the 300 Sport, a new specification with a powerful four-cylinder turbocharged petrol engine. It’s no BMW M3 or Alfa Romeo Giulia Quadrifoglio rival; instead, it takes on models one rung below those halo cars – in this case, the Giulia Veloce, which also uses a punchy and revvy four-cylinder petrol turbo.

Here we’ll find out what the new XE model is like to drive, and work out which of these two sporty saloons is the better choice. 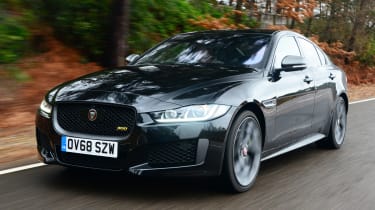 The Jaguar XE 300 Sport’s engine is the most powerful version of the brand’s Ingenium range, and it’s also found in the entry-level F-Type sports car. Boasting 296bhp, it’s more powerful than its Italian rival here, although both cars have a maximum 400Nm of torque.

But as the Jaguar is 260kg-plus heavier than the Alfa Romeo, that power advantage is dulled. Consequently, the XE couldn’t match the less potent Giulia Veloce in our acceleration tests; it was seven tenths slower from 0-60mph, and slightly behind in our 30-50mph trials in third and fourth gears. The only test in which the XE was faster was 50-70mph in eighth, where the Jaguar’s 10.7-second time beat the Alfa’s 12.5 seconds. 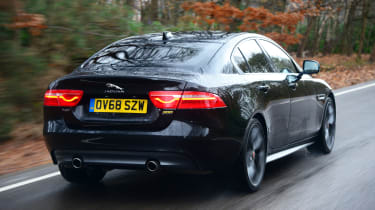 However, don’t think the XE’s engine is lacking pace; out on the road it feels every bit as powerful as its figures suggest. It’s just that the Giulia is a little more feisty. Unfortunately, the XE’s engine is sorely lacking in character. It sounds strained at higher revs, which discourages you from pushing hard, whereas at low revs it’s muted, meaning there’s less enjoyment to be had from using the engine. It’s the polar opposite of the Veloce.

Also, while the Alfa Romeo’s more vocal motor and rear-wheel-drive layout make it more exciting than the XE, the British saloon piles on speed in a surprisingly relaxed manner. There are a few reasons for this, but the main one is just how calm it is inside. At 30mph, our noise tests showed the Jaguar was the quieter contender.

Then there’s the XE’s most accomplished aspect, which is its chassis. The suspension soaks up bumps very well. Its set-up is softer than the Alfa’s, and while it can’t mask its higher kerbweight, the XE is still the more comfortable of the two cars. It broadly matches its rival’s agility as well. 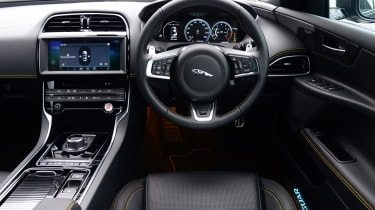 There’s plenty of grip and the steering is meaty and accurate, while the adaptive dampers do a great job of reducing body roll, yet aren’t too stiff in their normal setting. This is a strong all-rounder. So while the Alfa is lively and energetic, the Jaguar is more relaxed – but it still offers enjoyable handling.

If you keep things relaxed, the gearbox picks ratios well and changes smoothly. Switch to manual mode, though, and it can be frustrating. The shifts here happen well after you pull one of the paddles, and are more slurred, so you have to anticipate when to shift more carefully than in the snappier Giulia. In auto mode it’s less of an issue, but slowing down and then speeding up again (at a roundabout, for example) will often leave you waiting too long for a downshift. 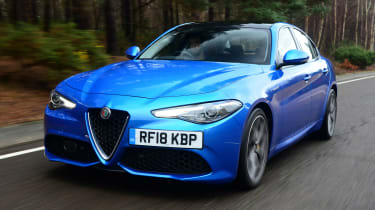 For: Entertaining handling, strong performance from an engaging engine.Against: Cheap-feeling cabin, poor infotainment, not as refined as its rival.

Alfa Romeo’s petrol saloon cars have always had plenty of appeal. In the sixties the Giulia used a revvy four-cylinder motor, and even in the nineties and noughties the brand’s range was known for its lively Twin Spark four-cylinder engines.

This Veloce model matches that reputation, even in an era of petrol turbos, because its 276bhp unit is one of the most lively and engaging 2.0-litre engines around. It matches the Jaguar’s 400Nm of torque, despite being 20bhp down on its rival, and with the Giulia’s 261kg lighter kerbweight, it’s punchy in gear. Yet unlike many powerplants of this nature, the Veloce’s sounds great and loves to be revved – and this gives the Alfa Romeo plenty of charm.

That light kerbweight, along with a more responsive gearbox and our test car’s limited-slip differential (part of the £1,950 Performance Pack), helped the Alfa hugely in our acceleration tests. The Giulia was faster than the four-wheel-drive Jaguar even in wet conditions, managing 0-60mph in just 5.3 seconds; the Jaguar took 6.0 seconds. 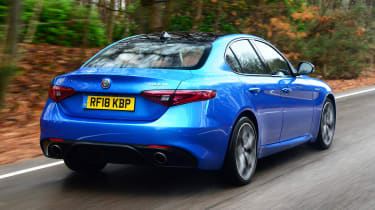 The Giulia has a balanced 50:50 weight distribution, with double-wishbone suspension at the front and a multi-link rear set-up. This means it matches the Jaguar’s sophisticated suspension layout and delivers great body control.

Adaptive dampers – switchable using the DNA drive mode selector – aren’t standard, but neither are they on the Jag, so at least there’s some room in the budget to specify some extras on the Alfa. Add the Performance Pack for these (they’re £840 on the XE), plus that limited-slip differential which boosts agility, and large gearshift paddles. This brings the specification and price closer to parity.

Those Ferrari-like gearshift paddles are lovely, and in manual mode the box is swift, if a little agricultural. However, this trait is magnified in auto mode, because the Alfa isn’t as smooth as its rival; it can be a bit jerky at times. One positive is that the transmission is more decisive and gets caught between gears less than in the XE. Overall, the Alfa’s transmission is faster to respond to inputs. 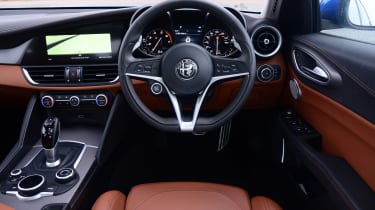 The extremely fast steering means you only need to make small inputs, but it’s light and not as well weighted as the Jaguar’s set-up. This can take some getting used to. What the Alfa does have in its favour is an excellent driving position, so you feel confident in delving into the impressive level of grip on offer. The chassis is also a delight, with beautiful balance and a nice sense of adjustability, even if you can’t disable the ESP. It’s not as planted as the Jag, in terms of both traction and ride quality, but both are fun to drive in different ways. 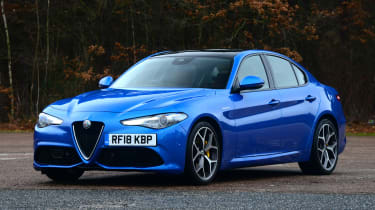 This is a close test between two fine sports saloons, but the Alfa is a better option. Its engine is a highlight, delivering revvy thrills and urgency, yet it will also be cheaper to run. The Giulia is more practical and cheaper to buy than the Jaguar, too, which is why it finishes first in this test. 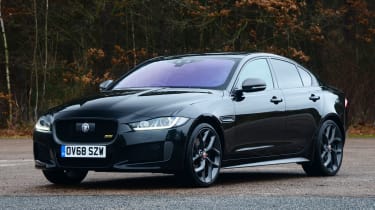 The XE 300 Sport builds on the standard car’s already excellent handling and comfort balance, and it’s really well suited to UK roads as a result. But it falls down because of its dull engine, which fails to instill excitement in the way its rival does. It costs more to run, too.