Is the Jaguar XE Reims Edition more than just an XE with a fancy paint job? We drove it to find out... 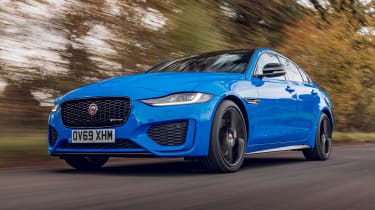 Jaguar has an illustrious motorsport heritage to draw upon, but making links between an iconic race-winning D-Type and a compact saloon with a fetching new paint job, seems like a bit of a stretch. Still, it doesn’t change the fact that the XE remains one of the best four-door execs in its class, and the cosmetic upgrades added here represent great value for money.

Car brands love to dig up motorsport heritage whenever they can. Reminding – or even educating – us punters of glorious race victories of past and present, helps bring a little extra credibility to a model range.

This year, we’ve seen Mercedes-AMG tease us with a hypercar using a Formula 1-inspired engine near-identical to the one that powered Lewis Hamilton to his 2015 world title. At the same time, Toyota’s development of a hot Yaris GR – a car brought about specifically improve its prospects in the World Rally Championship – continues apace.

And now Jaguar has revealed this: the XE Reims Edition. The Reims name harks back to one of the brand’s most significant race wins: the first for the D-Type at the 12 Hours of Reims in 1954.

Sadly, this isn’t a motorsport special on the level of the aforementioned creations from Mercedes-AMG or Toyota; Jaguar hasn’t elected to replace the XE’s roof with a tiny aero screen and rear-mounted fin as you’d find on the classic D-Type, nor is the body adorned with large numeric roundels.

In fact, the changes compared with the standard four-door exec in R-Dynamic S trim are all just cosmetic. The most eye-catching addition comes from the paint: the fabulous ‘French Racing Blue’ shade has been seen on a selection of super exclusive performance Jags in recent times, including the XKR-S and XFR-S. It’s matched up to a set of black 19-inch alloy, while the roof, grille, side window surrounds, and door mirrors are all black, too. 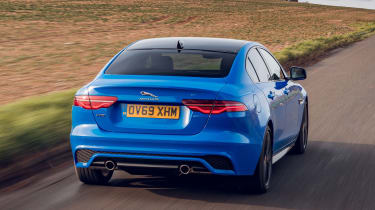 Step inside the cabin, and the theme continues. The only thing to break up the darkness of the leather seats, roof lining and dashboard – not to mention the tinted rear windows – is the silver contrast stitching. The driving position is fantastic, and the steering wheel both has plenty of adjustment and feels great to hold.

As with the rest of the recently-refreshed XE range, there’s an improved 10-inch touchscreen infotainment system, a gorgeous digital diver’s display (with graphics that alter according to the driving mode selected) and a mix of physical and touch controls for the air conditioning that work about as smoothly as any we’ve tried.

So the upgrades for a car that’s meant to evoke a rich motorsport history don’t really stir the soul, but mechanically, at least, business as usual is no bad thing. The Reims Edition comes with one engine option: a 2.0-litre turbocharged Ingenium petrol engine producing 247bhp and 365Nm of torque. The drive is sent to the rear wheels through an eight-speed automatic gearbox, which enables the XE to accelerate from 0-62mph in 6.5 seconds.

It certainly feels lively and sounds industrious enough, if not exactly the rasp of D-Type’s ‘XK’ straight-six it pays homage to. It is definitely quieter, though, which comes in handy on a long-distance cruise; conditions which should see the XE reach almost 40mpg. At 159g/km, its CO2 emissions are higher than the BMW 330i on 19-inch alloy wheels (133g/km), which places the Jag five bands higher in the 2020/21 Benefit In Kind company car tax ratings.

And as ever, the XE has a cracking chassis that makes it among the most enjoyable drives in its class. The BMW 3 Series arguably has an even greater balance, and the Alfa Romeo Giulia feels razor sharp, but the Jaguar manages to offer a level of body control and precision that never fails to put a smile on your face. The steering is quite heavy by class standards, but it suits the character of the car. It’s precise, too, even though it doesn’t have a huge amount of feel.

Yet none of this really comes at the expense of ride quality. It’s slightly firmer than an Audi A4, but it could never be considered uncomfortable. Even the 19-inch wheels - the largest available for the XE - don’t introduce too much in the way of fidget. Refinement is great too, so it’s completely at home covering an extended motorway stint.

Elsewhere, you’ll find the same niggling issues that pop up in every variant of the XE. It’s more cramped in the back than rivals, the boot is roughly 70 litres smaller than the class average, and you need to pay £440 if you want the rear seat backs to fold down.

Kit-wise, the Reims is largely the same as the R-Dynamic S trim. That means standard equipment includes full LED headlights, parking sensors all round, a reversing camera and smartphone integration. Beyond those features, the Reims Edition adds a Cold Climate pack, consisting of a heated windscreen, heated steering wheel and headlight washers.

And true to the typical special edition, rarity is guaranteed. Jaguar plans to produce just 200 Reims Edition cars, all for the UK market. Prices start from £38,295, which is pretty good value compared with the rest of the XE range: spec up a regular R-Dynamic S with some 19-inch wheels, a black pack and a nice paint finish, and you’re pretty much at the same price anyway.