The Jaguar XE has had a major revamp inside and out as the brand aims to take the fight to BMW, Mercedes and Audi 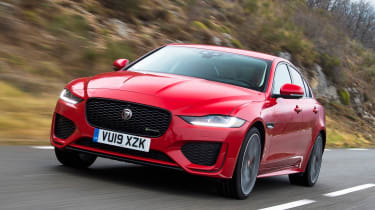 You could argue that the revised and much-improved Jaguar XE has become the car it always should have been. Either way, with its excellent new cabin and effectively redesigned exterior, the XE really is now good enough to compete head on with the very best from its German competitors in this class. Especially now that the Jag saloon costs less but offers so much more than before.

Jaguar has never had it easy with the XE. But that’s the nature of the beast when the competition you must face is world class and comes at you in several different forms. Step forward the excellent Mercedes C-Class, the ever-improving Audi A4 and BMW’s superb all-new 3 Series.

So the Jaguar XE has been given a major mid-life revamp, plus simplified engine and model line-ups, to keep the British sports saloon competitive with its rivals from Germany.

On the outside the Jag’s been thoroughly redesigned, so it looks wider, lower and more aggressive, with new LED lights front and rear, and sportier bumpers at both ends. In the flesh it looks bigger, lower, more expensive and more imposing, which is some achievement considering that its dimensions remain basically unchanged. 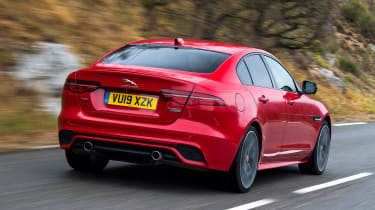 It’s on the inside where the really big upgrades have occurred. There’s no more space on offer, true, which means the rear seats remain cosy compared with those of the Germans. But in every other respect the new XE’s cabin takes a giant leap forwards, featuring much of the design and tech that makes the I-Pace SUV so successful inside.

The main point of focus is the new Touch Pro Duo infotainment system, lifted pretty much wholesale from the I-Pace. This features a 10.2-inch touchscreen for the satellite navigation and communication systems, plus a smaller display below to control the more minor functions, such as heating, climate control and so on.

There’s also a new wireless charging pad for your phone in front of a fresh F-Type-inspired gearlever, while the steering wheel is new, as are the buttons it contains and the simplified, better-looking door inserts. 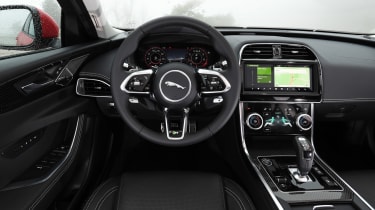 As such, the revised XE feels like a much higher-quality car inside, with better-grade leather for its seats, far higher-quality woods and plastics for the centre console, plus a sense of genuine sporting luxury that was sorely lacking before.

There are now just three engine choices – one diesel and two petrols – and three trim variations: S, SE and HSE. You can then add R-Dynamic specification to any of the above; this brings cosmetic enhancements inside and out, but no mechanical differences. Crucially, Jaguar has also dropped the price by around £1,700 compared with similarly specified versions of the old XE.

Not much has changed mechanically beneath the XE’s much-improved new skin, but dynamically, not much needed to. Performance from the 2.0-litre turbo engine is subtly strong, with almost no turbo lag perceptible but genuinely potent acceleration available from 2,000rpm onwards. True, the fastest four-cylinder XE doesn’t make a particularly stirring sound at any point, but you can’t complain about the way it goes.

Or the way it stops, steers, rides, handles or changes gear. The steering remains a real strong point on the XE, even compared with the best Germans. As do the ride and body control. The way in which the XE glides across the ground so fluidly, with such a light touch, yet also such precision to its handling, is a rare treat. And this on a test car adorned with optional 20-inch wheels and tyres. Expect models with the standard 18-inch alloys to be even more compliant.

Also new for the XE is a first-in-class switchable camera view for the rear-view mirror which, although optional, improves rearwards vision when the back seats are full. The technology has been lifted straight from the Range Rover Evoque and in practice it works a treat. Much like the rest of the more competitively priced, more appealing new Jaguar XE.