The Alfa Romeo Giulia Veloce fills the gap between the standard car and the range-topping Quadrifoglio, but is it worth the money? 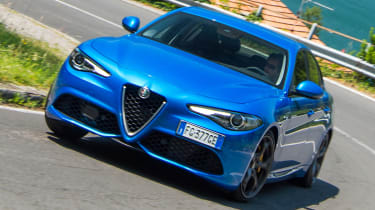 The new Alfa Romeo Giulia Veloce doesn’t quite fill the gap between the Giulia Super and the bonkers Quadrifoglio, but it undoubtedly offers the biggest grins of the standard Giulia range. It’s more than a match for similarly-priced rivals on paper and it delivers on the road too, with strong performance and a genuinely enjoyable chassis.

Chances are that you’ve already decided whether you want an Alfa Romeo Giulia or not. Alfa Romeo’s first rear-wheel drive saloon in decades is more than capable of going toe-to-toe with its longer-established German rivals on the road, but it’s mightily appealing in the showroom too, and that counts for a great deal.

Where it can’t quite match the BMW 3 Series, Mercedes C-Class or Audi A4, is in the sheer range of models it offers. The Giulia Veloce goes some way to redressing that, doing its best to fill the enormous power gap between the 197bhp 2.0-litre petrol and the ballistic 503bhp Quadrifoglio V6.

Mechanically, the Veloce is much the same as the standard car, with an aluminium block and head, direct injection technology and variable-geometry turbocharging. But the 2.0-litre petrol engine has been tweaked to liberate an extra 79bhp and 70Nm of torque, cutting the 0-62mph time by nine-tenths of a second. That makes the Veloce as fast as a 321bhp BMW 340i, despite being severely down on power. 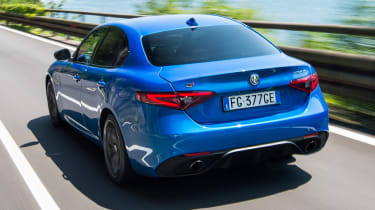 Like all UK-bound Giulias, the only transmission option is an eight-speed automatic, but unlike UK-bound Veloces, the Q4 version driven here sends power to all four wheels rather than just the rear. So while it’s not totally representative of what British buyers will get to drive, our early taster is food for thought.

The Veloce’s extra punch quickly becomes apparent, and while the engine never really encourages you to spin it to the red line, the 2.0-litre unit charges hard through the lower reaches with a gruff exhaust note to goad you on.

Throttle response remains keen on the move and switching from ‘Natural’ to ‘Dynamic’ on Alfa’s DNA drive mode selector only improves things further, particularly at low revs. The eight-speed auto is smooth and swift, and flicking up and down the cogs with those enormous alloy paddles is a joy. 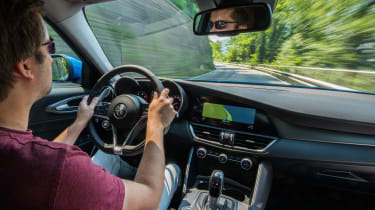 So too is the chassis – undoubtedly the Giulia’s strongest aspect. Dry-road traction is pretty unflappable with the Q4 all-wheel drive but, as non-Quadrifoglio Giulias don’t let you disable the traction and stability control, our rear-wheel-drive cars shouldn’t be too tail happy either.

All Giulias have great balance though and a quick, accurate steering rack. There’s not much feel, but with a relatively spry 1,530kg kerbweight the Veloce is agile and a lot of fun. It even rides well on the 19-inch wheels, and while the brake pedal feels a little soft (and the hazard lights flash under even moderately hard braking) there’s plenty of stopping power too.

Visual changes pitch the Veloce somewhere between the Giulia Super and the flagship Quadrifoglio, though the most eye-catching change is the newly-available Misano Blue paintwork, which should look as vibrant in Manchester, Middlesbrough or Milton Keynes as it does in Milan. A set of 18-inch alloy wheels are standard but the bigger rims on our car are the ones to have – matching the Quadrifoglio in size and appearance. The bumpers match the cloverleaf-badged model, too, as do the Xenon headlights, while at the rear there’s a twin-tailpipe exhaust to complete the look.

Climb inside the Veloce’s cabin and you’ll also note a few changes, including shapely sports leather seats, aluminium inserts and those Ferrari-style aluminium gearchange paddles. Bar one or two minor question marks over trim quality – the gear selector looks flimsy and feels rather cheap – it’s a well-designed environment and the driving position is spot-on, with plenty of adjustment in the supportive seat and for the stylish steering wheel.

There’s some theatre when you turn the car on, as well, as Alfa has positioned the starter button on the steering wheel just like Ferrari does on its 488 GTB supercar. Though the bland four-cylinder noise that emanates from in front of you when you give the accelerator a prod shatters the illusion. Thankfully, that same four-pot responds keenly to small throttle inputs and a sporty note soon emerges.