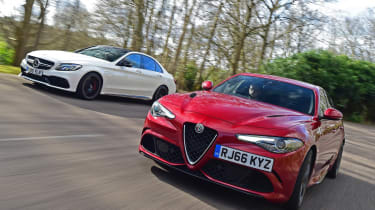 German brands have dominated the super-saloon class for years, but now there’s a new contender from Italy that’s out to upset the established order.

The Alfa Romeo Giulia Quadrifoglio certainly has what it takes to muscle in on this exclusive crowd, thanks to a racy specification that includes pumped-up looks, a 503bhp twin-turbo V6 and rear-wheel drive. Better still, it has been priced to undercut rivals. However, any newcomer needs all the help it can get against the Mercedes-AMG C63.

• The best performance cars in the world

The mighty Merc is ferociously fast and hugely entertaining, while it oozes upmarket appeal. So which of our duo will land the decisive punch in this encounter? 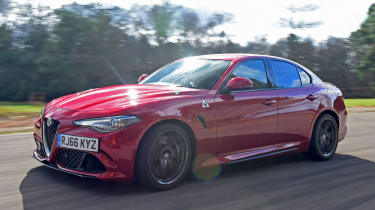 The standard Alfa Romeo Giulia has proved more than a match for its compact executive rivals, so hopes for the hot Quadrifoglio are high.

It certainly looks the part, with subtly muscular lines and neat details such as the bonnet vents, four leaf clover badges on the front wings and a small, carbon fibre tailgate spoiler.

Inside, the Giulia has one of the best Alfa Romeo interiors in a generation, thanks to its slick design, decent materials and solid build quality. Yet it still doesn’t have the premium appeal of its rival, while details such as the flimsier feeling switchgear are out of place in a £60,000 car. But the thin-rimmed three-spoke steering wheel feels great in your hands, while the green and white stitching on the seats and dash let you know you’re in something a bit special. However, it’s worth noting that the figure-hugging, carbon-fibre shelled bucket seats fitted to our test car are an eye-watering £2,950. 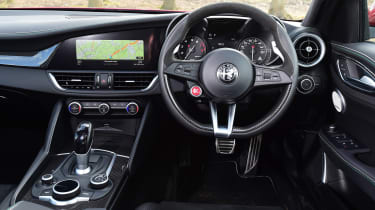 At the track, poor traction off the line meant the Alfa needed 5.3 seconds to sprint from 0-60mph. However, once up and running, the combination of 600Nm of torque and an eight-speed gearbox meant the Giulia narrowly had the upper hand over the C63 during our in-gear tests. It completed the fourth gear 30-50mph run in 2.5 seconds.

On the road, the Alfa feels blisteringly quick, an impression that’s aided by a sharp throttle response and a slick-shifting transmission that can be controlled via large column-mounted paddles. So it’s a shame the Giulia’s 2.9-litre V6 sounds a little flat. Engaging Dynamic mode increases the volume and adds some cracks from the exhaust on upshifts, but it’s not as characterful as the Mercedes’ V8. 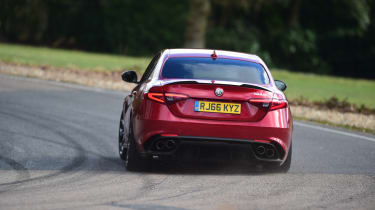 The Giulia’s steering is a bit lifeless, but it’s quick and there’s bags of front end grip. Agility is further boosted by the torque vectoring differential, which shuffles torque to the outside wheel to help fire the car out of corners. Like the Mercedes, you can alter your line using both steering and throttle. However, there’s not as much traction as in the Merc, particularly in slippery conditions.

The standard adaptive dampers don’t control body movements quite as well as in the Merc, even in the firmer Dynamic setting. The flipside is that the Alfa is a more supple and relaxing car than its rival in Comfort. Combined with the low levels of wind and engine noise, it makes the Giulia a better long-distance cruiser. Our car was also fitted with the crushingly expensive £5,500 carbon ceramic brakes. This offered fade-free stopping at the track, but on the road the set-up is snatchy and requires hefty pedal pressure to perform effectively.

Infotainment: Widescreen display is better integrated into Alfa’s dash than the Merc’s screen, while both cars feature easy-to-use control wheels.Steering wheel: Large paddleshifters and big red starter button help to give the Giulia a racing car feel.Design: Eyeball air vents are a traditional Alfa touch, although build quality is up to modern standards. 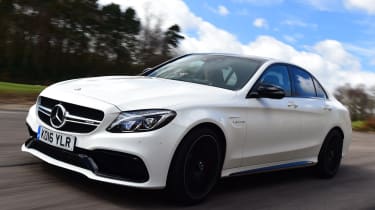 There’s no mistaking the Mercedes-AMG C63 S  for a common or garden C-Class. Even if you miss the power bulges in the bonnet, the flared wheelarches and quad exit exhaust, you won’t be able to ignore the rumbling V8 soundtrack.

The 4.0-litre twin-turbocharged  unit delivers 469bhp and 650Nm in the standard C63, while this S version raises these figures to 503bhp and 700Nm respectively. As you’d expect, this translates  into explosive performance. Better traction off the line meant the Mercedes blasted from 0-60mph in just 4.9 seconds, which was four-tenths quicker than the Alfa Romeo.

The Giulia hit back during our in-gear tests, where the shorter ratios of its eight-speed auto delivered quicker acceleration than the seven-speed Mercedes. However, in the real world there’s little to separate our duo, while the C63 S’s twin- clutch transmission responds more crisply to manual gearchange requests, and is smoother when left to its own devices in auto mode. 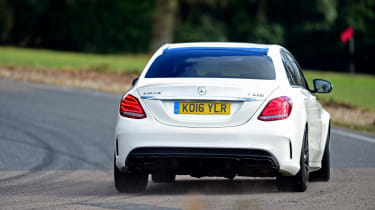 Then there’s the Mercedes’ addictive soundtrack, which starts with a baritone burble at idle before turning to a thunderous, crackling bellow as the needle on the rev counter swings around to the red line. By comparison, the V6-engined Alfa sounds a little flat and muted.

The C63 S maintains its advantage when you guide it through a series of corners. Not only is it more engaging and involving, it maintains a rock-solid composure where the Giulia can get a little flustered. This is partly down to the Mercedes’ superior traction, which allows you to make better use of the available performance for more of the time, particularly when the roads aren’t dry.

And while the AMG’s steering isn’t as quick as the Alfa’s, it’s better weighted and offers more feedback.  Yet it’s the Mercedes’ composure over twisting and undulating roads that impresses. It’s less affected by bumps than the Giulia, which can skip and slide over broken surfaces, even when the stability control is switched on. Turn the systems off, and the Mercedes is more approachable.

The trade-off for this reassuring control is a firmer ride, even with the adaptive dampers in their softest setting. However, it’s far from uncomfortable, and in combination with low levels of wind and road noise it makes the C63 an effortless and enjoyable cruiser.

The Mercedes feels classier inside, thanks to its more upmarket materials and slicker design. It also features a more intuitive and comprehensively equipped infotainment system. 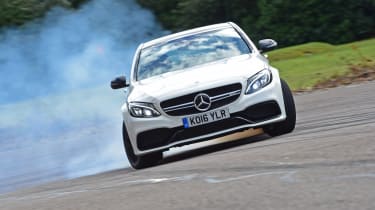 Few cars can match the muscular Mercedes for driving thrills. With its booming soundtrack, scorching performance and involving handling, the C63 S forces you to savour every moment. It’s not cheap to buy or run, but with this type of car you’re buying with your heart over your head. 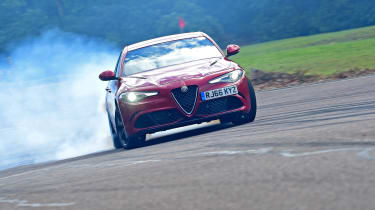 Make no mistake, the Giulia Quadrifoglio represents a stunning return to form for Alfa Romeo. It looks great and is huge fun to drive, plus it’s attractively priced and well equipped when compared to the C63 S. Yet it can’t quite match the Mercedes’ depth of ability, sense of drama or cutting-edge tech.