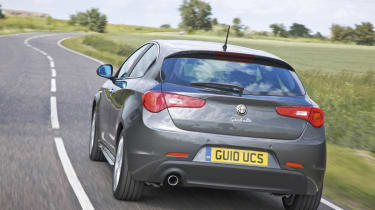 THE Giulietta is an appealing car that could push Alfa into the mainstream. It blends traditional Italian strengths such as design flair and gutsy engines with decent build quality and practicality. However, even though it’s a handsome machine with a premium feel, buyers might baulk at our test car’s £21,195 price tag. And it can’t match its rivals in terms of driving pleasure, as it’s let down by clumsy controls and a DNA system that needs fine-tuning.

It's the Alfa that’s all about mass appeal. Following on from the arrival of the MiTo supermini, the new VW Golf-rivalling Giulietta needs to please both diehard fans and newcomers alike.

We drove the most powerful diesel model to find out if the hatch is a genuine crowd pleaser. The Giulietta keeps the familiar silhouette of the 147 it replaces, but adds neat touches such as LED running lights and the trademark triangular grille, which now ‘floats’ free from the bodywork.

The coupe looks discreetly conceal the fact that this car is only available as a practical five-door, with the extra handles disguised in the C-pillars. Step inside, and it’s obvious that real effort has gone into making the Giulietta a quality product. The swept-back dashboard – complete with a neat trio of circular switches – is well made, and the materials used are good to the touch.

The Giulietta also excels in other areas. According to Euro NCAP, it’s the safest compact car ever crash tested, and the entire range is fitted with Start&Stop technology.

Carbon dioxide emissions on this model are only 124g/km – not bad for a car with the capacity to sprint from 0-62mph in only eight seconds.

The 2.0-litre JTD engine delivers its 170bhp in a very smooth fashion, and its refined character fits well with the comfortable ride, which is a big improvement over the more jittery MiTo. This is partly thanks to the sophisticated new multi-link rear suspension. However, it’s the driver-controlled DNA switch which dictates how the car feels on the road.

Selecting Dynamic mode sharpens up the responses of the throttle and brakes, plus frees up an extra 30Nm of torque from the engine. But it also adds weight to the numb steering, making spirited driving tiring rather than rewarding.

The alternative is normal mode, but most will find throttle response too lethargic in this setting. It’s a shame that there isn’t a better compromise between each mode, and the system spoils a car which is otherwise a big step forward.