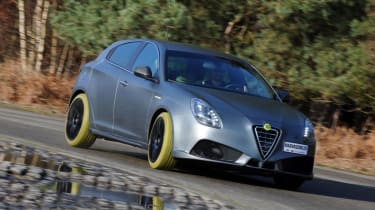 The G430 is the most usable car Marangoni has made to date – but it’s still a raw and uncompromising hot hatch. Its addictive straight-line performance and sense of fun inject some sorely needed flair into Alfa’s slightly conservative Giulietta, and we can only hope that the manufacturer releases a GTA edition which takes its inspiration from this amazing model.

Here’s an Alfa that will turn you green with envy! This striking one-off is the latest special from Italian tyre maker Marangoni – and only weeks after its debut at the Bologna Motor Show, Auto Express has taken it for an exclusive first drive.
It’s based on the hot Giulietta Cloverleaf, and the eye-catching green tyres are only the start of the extensive tweaks. Visually, it’s more toned down than the MiTo M430 we drove in Issue 1,046, although it has the same Ferrari-inspired front bumper and carbon fibre rear diffuser.
The Wasabi Green theme continues inside. Here, the Alcantara and leather on the seats are accompanied by stunning details such as an Apple iPad dock mounted in the centre of the dash and a colour-coded Segway electric scooter that stows neatly in the boot.

What impresses most, however, are the performance upgrades. Thanks to a new turbo and exhausts, the 1,750cc engine has been boosted to a whopping 282bhp – and it has been remapped to keep lag to an absolute minimum. The effect is astonishing, and above 2,500rpm the G430’s pace is searing.
Each gearchange is accompanied by a whoosh of induction noise and raucous bark from the twin exhausts. The raw, hot hatch experience makes this Giulietta feel much more like a track day car.
To cope with the extra muscle, the suspension is 40mm lower. Coupled with the black, 19-inch wheels, it provides a harsh ride. Yet although the chassis still struggles to put down all the power, scrabbling around for traction if you press too eagerly on the throttle, the G430 grips strongly and corners with poise.
Overall, this reworked Giulietta is an enormously entertaining car to drive. It’s just a pity Alfa couldn’t inject the same levels of excitement into the standard model.
Rival: Ford Focus RS
Another car that is infamous for its bright green paint! The 300bhp Focus RS has better performance potential and more polished dynamics, but it can’t match the Marangoni Giulietta’s looks or creativity.
Share this on TwitterShare this on FacebookEmail