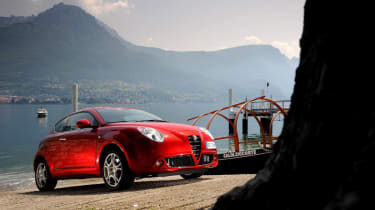 So is the MiTo the brand new Alfasud? Not quite, but it’s certainly a very appealing car. Alfa Romeo has managed to pack all the style of the 8C supercar into a supermini-sized package – and what’s more, the MiTo is nearly as good to drive as it looks. The best part is the price, though. The newcomer is much cheaper than the MINI, yet it is better equipped and will turn more heads. In our book, that makes the Italian baby a winner.

Italy has a rich history of great small cars. But traditionally, it has been Fiat, not Alfa Romeo, which has produced them. You have to go back to the Seventies Alfasud to find a compact model from the sporty brand that truly won the hearts of British buyers.

However, all that could be about to change with the arrival of the MiTo. Alfa’s first supermini is the 21st century’s answer to the Alfasud. Big on style and performance, it’s packed full of technology – yet is affordable, too, with prices from £10,975.

But there is stiff competition. Its chief rival is the MINI, then there’s the BMW 1-Series and upcoming Audi A1 and Saab 9-1. Is the MiTo mighty enough?

Well, it is a real head-turner. Alfa reckons stylists have distilled the looks of the 8C supercar into a four-metre-long package, and all the details are there, from the aggressive front end to the squat rear with its circular LED tail-lights.

In spite of the long front overhang, the car looks great. Inside, it’s smartly styled with a carbon fibre-effect dash and deep-set dials. The driving position is low and sporty, and while some plastics don’t have the high-quality feel of a German car, the raft of kit compensates.

Three trims are available – Turismo, Lusso and Veloce – and even the basic car comes with air-con, 16-inch alloys and an MP3-compatible stereo.

The cabin is snug, while the rear seats are cramped. There’s not much luggage space, either. But that’s not the point says Alfa’s head of engineering Harold Wester. He claims the target was to “make the MiTo the sportiest compact car ever”. And it packs plenty of tricks as a result. While the platform is derived from the Fiat Grande Punto, everything is sportier. The dampers incorporate mini springs which work with the conventional units to reduce body roll, yet improve the ride.

The MiTo is also the first Alfa to get the DNA system. This has three driving modes: Dynamic, Normal and All Weather.

We drove the TB Lusso, which has a 155bhp 1.4-litre petrol turbo. It’s not short on pace, with 0-62mph in eight seconds and a 134mph top speed, while the 230Nm of turbocharged torque means plenty of mid-range urge. Throttle response could be better, though, particularly in the Normal set-up.

On a twisty road, the MiTo is a lot of fun. The electric power-steering doesn’t offer much feel, even in Dynamic mode, but it’s accurate and quick. Combined with stiff suspension and a wide track, it means the Alfa turns into corners very quickly indeed. The car grips hard and resists body roll well, tightening its line safely at a lift of the throttle.

The ride is stiff, and not as compliant as the MINI’s, but the car is still good to drive. And it’s just the model Alfa needs. Even at £14,800 for the top-spec Veloce, the MiTo is great value.

Rival: MINI Cooper S A SUPERB all-rounder, the MINI combines cheeky looks, superb build and a wonderful driving experience. But it comes at a price. To match the MiTo turbo’s pace, you will need to spend at least £16,245 on the Cooper S.