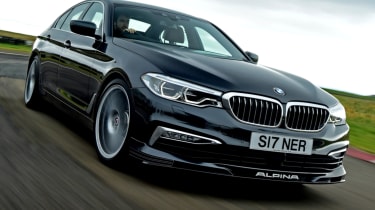 Alpina’s new D5 S enhances the best bits of BMW’s 5 Series, adding plenty of neat features, styling touches and equipment, which helps to justify its inflated price tag – not to mention the level of performance, refinement and comfort on offer here. If you’re after an exclusive take on a sporty but usable and economical saloon, the D5 S is Alpina at its subtle, understated best.

Many tuning companies strive for attention through outlandish extras and extravagant looks, but Alpina does things differently. In fact, it’s a refreshing approach, and to call it a tuning company is rather underselling the work Alpina does.

For those of you not familiar with the brand, its history is intertwined with BMW. Since 1965 its been working its magic on BMW cars, but to the point that its production process is so deeply integrated with the German brand that Alpina is now considered a manufacturer in its own right – and this, the D5 S, is its latest creation.

Based on the current G30-generation BMW 5 Series, it uses a bi-turbo 3.0-litre straight-six diesel that kicks out a frankly incredible 322bhp and 700Nm of torque. While the D5 S weighs a not inconsiderable 1,870kg, this is still enough to hit 62mph in just 4.9 seconds and 171mph flat-out. 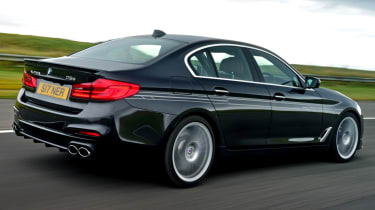 But it’s the way the Alpina delivers this effortless wave of performance that’s key to this car’s appeal. It pulls with a smooth swell from low down and continues this refined romp towards the horizon higher up in the rev range. The eight-speed auto is keen to change up to drop the engine back into the heart of that torque band, shifting with only a brief pause that’s masked by the easy way the transmission switches between ratios. Four-wheel drive means traction isn’t an issue.

Manual mode gives an even greater degree of control over the powertrain, allowing you to hold gears and make the most of that motive force, but the buttons on the back of the steering wheel rather than proper paddles are a frustration.

It’s one of very few issues with the D5 S. Another minor one is the steering, which is light and lacking feel, but it doesn’t disrupt the driving experience too much, and is precise enough to make the most of the grip served up by the Pirelli tyres.

They wrap around Alpina’s signature 20-inch Classic alloys, which you might think would ruin the ride quality – but this is far from the case. The D5 S chassis’ Comfort Plus mode means the dampers cushion blows and control wheel movement with a lovely compliant feeling.

You can step this up to Sport, which reduces roll, but doesn’t improve the steering and lets more feedback from the road flow through the suspension as a trade-off for tauter body control. However, the D5 S is best in its most usable, compliant mode. 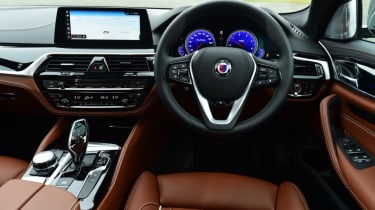 While the bodywork graphics will no doubt prove divisive (they’re a no-cost option), they combine with the wheels and Alpina’s other styling touches to subtly mark this car out as something special. The deeper front bumper, boot lip spoiler and massaged rear bumper housing the quad tailpipes are all nicely restrained and don’t scream ‘tuner’.

Inside, things are more bespoke, with Alpina’s traditional green and blue stitching, a plaque that shows the model designation, a D5 S specific re-skin for the digital dash and an incredible level of quality.

You can, of course, add more kit, with all manner of extras such as the £1,995 rear-seat entertainment pack, but if you get liberal with the options list expect the £62,000 price tag to rise rather rapidly.

That might seem steep, but when you consider a 530d xDrive M Sport is £50,105, the extra for the Alpina given what it offers won’t be an insurmountable obstacle for buyers wanting something a lot more individual. What’s more, with dimensions identical to those of the standard 5 Series there’s just as much space inside, while the 530-litre boot means this is an enormously practical family saloon car. Official figures of 46.3mpg and 161g/km CO2 ensure that there’s not too much of an efficiency penalty for the extra performance, either.

In the market for an executive car? Then take a look at the best on sale right now...