The DBX is the subtler choice when compared to its close rivals; interior quality is good, too. 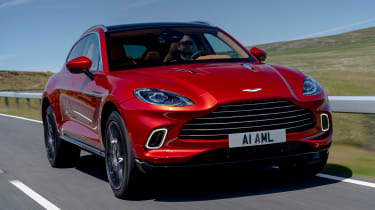 From the outside, it’s clear that the DBX is an Aston Martin. The familiar style and design flourishes are particularly evident through the front-end, leaving a much more subtle impression than that conveyed by its shouty competitors. Aston’s design team wanted the DBX to look smaller than it actually is, and they appear to have succeeded with the SUV seeming rather svelte and stylish compared to the big, brash nature of so many other high-end 4x4s.

Inside, the full-length panoramic roof bathes the car in light and you’re greeted by swathes of leather across most of the cabin. The rest is a mix of metallic and piano black finishes, although you can have your DBX any which way you fancy – at a cost. Overall quality is good, but it doesn’t do enough to trouble the Bentley Bentayga in this regard.

The engine start button sits at the top of the dash, flanked by P, R, N and D buttons to control the gearbox, while alongside is a 10.25-inch full colour TFT screen for the main instrument binnacle. 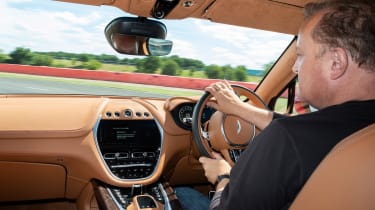 Aston has had to rely on Mercedes rather too much with the DBX’s switchgear. The centre console is a touch fussy and strewn with small buttons that are difficult to differentiate. While the 12.3-inch infotainment screen does come with Apple CarPlay, it’s a generation behind Mercedes’ current models and can only be operated by the control wheel or touch pad – so you may end up prodding the display to no avail.

The standard Premium Audio System includes 14 speakers and a 800w total output, while there are also four USB ports for smartphone connectivity.