We’ll avoid giving a star rating until we’ve driven a production car, but in prototype form the DBX is hugely impressive. It delivers a driving experience that no other SUV can – in fact, it doesn’t feel like an SUV. Yet it still does all the day-in day out things that SUVs need to do. It’s not perfect – what is? But if we were about to put a sizeable deposit down on a luxury, sporting SUV, we’d be heading to an Aston Martin dealer pretty quickly.

SUVs have been the saviours of many a car company. Porsche would not be Porsche (or arguably anything at all) without its Cayenne and Macan models, while it’s fair to say that Mercedes, Audi and BMW’s balance sheets wouldn’t be anywhere near as healthy without their 4x4 sales. Even Rolls-Royce’s recent results were propped up by sales of the Cullinan.

Aston Martin’s financial woes have been well documented of late, so the famous British brand’s first SUV, the DBX, can’t come too soon. But is it too little too late?

Auto Express was invited to DBX HQ, the all-new production facility in St Athan, South Wales, to take a drive in the new model alongside Aston’s mercurial Matt Becker, officially the company’s chief engineer, but unofficially one of the greatest chassis gurus of all time – and quite a handy driver, too. 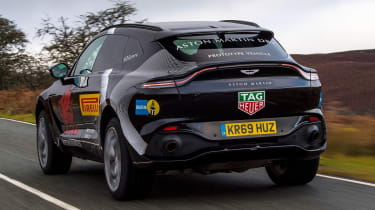 Today it’s us behind the wheel, though, and without some trepidation given what’s riding on the DBX’s shapely shoulders. And let’s start with the design – which we’ve been able to enjoy for the past few months since the camouflage came off.

At the front it’s pure Aston – sleek with the headlights slotting nicely beside the protruding top setion of an oversized traditionally-shaped grille and laying back into the bonnet complete with slotted air vents.

Bright rectangular LED daylight running lights sit at the far reaches of the lower face of the DBX, while a more usual Aston vent treatment behind the front wheels is replaced by a more dramatic triangular slash that finishes just shy of the front door. 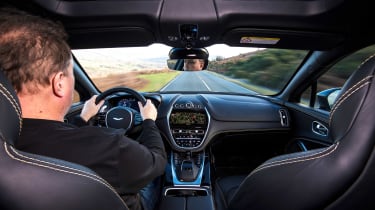 The back end is equally dramtic with full-width, slim LED tail lights – very similar to those on the Vantage – and a pronounced rear spoiler that works with the rest of the aerodynamics to enable the DBX to do without a rear wiper. Given the state of the weather on our test drive, we can confirm that the rear screen stays miraculously clean.

Lower down, the twin exhaust pipes poke out of the bodywork with what looks like a starburst effect of cooling holes around them.

While Astons of late have delivered beauty on the outside, the interiors have been less successful. This, though, is the most attractive and effective Aston interior design to date. It’s dominated by a central horseshoe-shaped area in which sits the 10-inch infotainment screen plus the heating and ventilation controls. 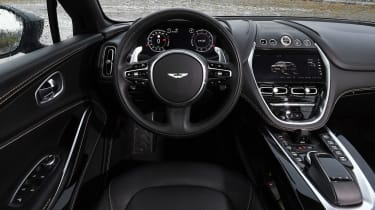 The dash is clothed in leather, with a cowl sitting over the 12-inch digital instrument display looking a little like Dracula’s cape sitting on his shoulders, while the two symmetrical sections on either side finish just shy of a central speaker in the centre of the top of the dash, with rather odd welts that seem to serve no purpose other than to potentially attract dust.

So the DBX delivers on style, while it also does a remarkable job of hiding its size. It is “bigger than a Cayenne, but smaller than a Bentayga,” according to Becker. It’s actually 5,039mm long, but looks more akin to a Macan in its size.

That’s a theme that runs throughout the car. “We wanted to make sure the car felt smaller when you drive it, too,” Becker tells us. “We wanted the car to feel like it shrinks around you on the road.” So let’s find out.

At this point, we need to reiterate that the car we’re driving is an early PT1 prototype – there are PT2s and PT3s to come. According to Becker, it’s around 90 per cent there, with some tweaks to the settings around the front suspension that will make the car feel more settled when it goes over things like Cat’s Eyes in the road. Elsewhere pretty much every part of the car will be finessed and improved, like the vents that will feel more metallic than plastic on this car.

As you’d expect, the car is keyless – the fob can remain in your pocket or bag –and you prod a centrally-sited start button that sits high on the dash, with gear selector buttons either side.

The 4-litre twin-turbo V8 springs into life and settles into a tuneful rumble. It’s a slightly different unit to that found in the Vantage and DB11, and Becker and his team have clearly enjoyed playing with the sound; it’s “more mellow” in this version, he tells us, but still with plenty of playfulness with pops and bangs in Sport or Sport+ modes. 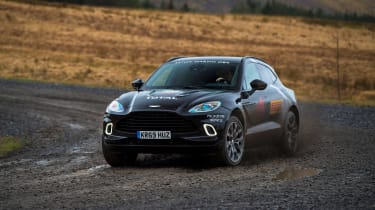 There’s still a sizeable 543bhp to play with and 700Nm of torque. That goes via a nine-speed torque converter auto box – better for smoothness and for towing, according to Becker – and into a four-wheel drive system that, like the engine, is Mercedes-sourced.

The technology in the chassis is everything you’d expect in a £158,000 SUV. Adaptive triple-chamber air suspension works with adaptive dampers and an electronic anti-roll system, while active differentials with an active central differential and an electronic rear limited slip differential ensure the power is sent to the right wheel, whether it’s more spirited driving you need or you’re heading off road. And yes, the DBX does very much go off road.

But does it handle like an Aston Martin should? In short, and even in this early car, yes. It has a playfulness that we weren’t expecting; the front end feels pointier than an SUV has a right to, while the lack of bodyroll seems to defy physics. It feels more like an Audi RS, BMW M or Mercedes-AMG estate than something that sits 1,680mm tall. 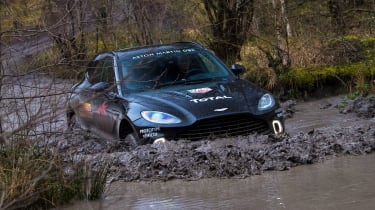 Of course that V8 provides a massive shove in the back when you want it to (with a beautifully beefy soundtrack to match), but the DBX flowed from corner to corner through the Welsh hills of our test route better than any SUV we’ve driven before. It’s that ability to transition that SUVs struggle with, but the DBX seems to take in its stride – all with delightfully weighted and feelsome steering through a nicely chunky round wheel. This SUV does, indeed, seem to shrink around you. Don’t get us wrong, the DBX isn’t Vantage sharp, but it feels like a sports car more than it looks like a sports car.

You can play with a number of settings, as you’d expect. GT is the normal setting, then there are Sport and Sport+, which sharpen responses from chassis, gearbox and steering progressively as the car lowers further with each mode. Individual lets you choose the best of all worlds (power on Sport, exhaust on Sport+ and chassis on GT would be our pick), while there’s Terrain (which raises the car up) and Terrain+ (up again) for off-roading – more about that in a bit.

As we know from those RS, M and AMG models, on-road dexterity normally comes at the expense of comfort, and this is a family SUV expected to be more than just a sports car. But again, Becker and his team obviously put plenty of actual and virtual miles into the development process and tweaked, then tweaked again to get an almost unbelievable balance between agility and comfort. 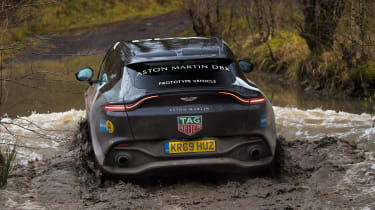 Pirelli deserve a degree of congratulations here, too. Our car was on bespoke all-season tyres that were difficult to fault in terms of grip, comfort and noise – the DBX is pleasantly hushed when cruising. We’d probably choose a DBX with this rubber, rather than summer tyres (again bespoke Pirellis) or dealer-fit winters (likewise).

Those Pirelli all-seasons did a fine job as we headed further into the Welsh hills and off road. It was a little odd wading through deep water (there’s a 500mm wading depth) and up and down some pretty steep and rugged inclines, then seeing the Aston Martin badge on the steering wheel. But while it’s no Land Rover, the DBX will handle more off-road challenges than most owners would even consider. 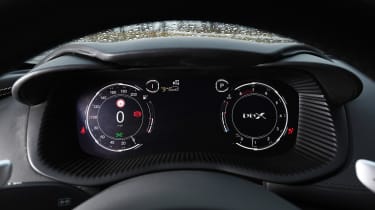 So the DBX drives like an Aston, goes where an Aston has never (willingly!) gone before and rides like a grand tourer. But does it do the SUV things that are so important to these ‘want it all’ buyers?

Aston has used its female advisory board well here, it seems, whether it’s the sizeable space to store a handbag in the centre console – “You don’t want to put an expensive handbag on the seat next to you for security reasons, nor on the floor where it might get dirty,” says Becker – or the view down the bonnet to the extreme corners, which is important for all drivers.

In fact, visibility all-around is impressive with usefully large door mirrors and decent over-the-shoulder views, too. The driving position is spot on with plenty of adjustment, but the array of buttons on the centre console is a bit fussy – there’s lots of them and spotting which does what isn’t the easiest. 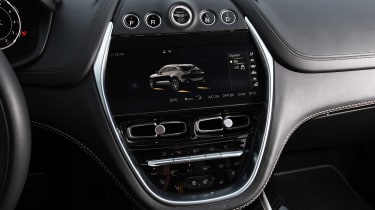 And much as Aston has now joined the tech race with Apple CarPlay now standard, it’s still a little way behind with no wireless phone charging – yet – an infotainment system that relies on a cumbersome controller rather than a touchscreen, and a premium audio partner yet to be announced. There are plenty of advanced driver assistance systems on board, though, each with their own initialism.

While on the subject of tech, there’s no electrification story on the DBX either – not even a mild hybrid system. Aston CEO Andy Palmer has promised that all models will feature electrification by 2025, but it’s unusual these days to be talking about a new car without talking about electrification. It has to be said, though, that there are plenty of people who’ll be happy with that.

With no big batteries to hide anywhere, we defy anyone to feel short changed sitting in the back. The ride back there, if anything, feels even more luxurious, while the view forwards, sideways and upwards through the standard glass roof will keep people of all ages happy. The doors open usefully wide, too, while the quality you’re presented with as you step inside is where you’d want it to be for £150,000-plus. 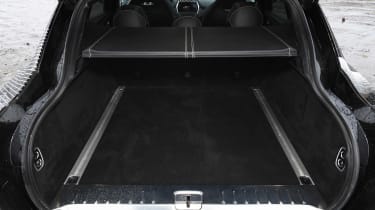 Right at the back is a decent 632-litre boot with more space under the floor. It’s a long way up for your dog to jump, although the air suspension does go into its lowest setting in access mode.

The DBX will also tow, with a capacity of 2,700kg, although that will obviously dent fuel economy. You wouldn’t expect that to be good and it’s not – a combined average under the new WLTP standard of 19.7mpg. If you’re worried about CO2 emissions, look away now: 269g/km measured under the older NEDC standard.

For some luxury SUV buyers, that might matter. But for a great many it won’t. They’ll just be focused on buying the very best SUV that they can for the money. And on this prototype form with improvements to come, the DBX fulfils that brief brilliantly – it’s a very special car that could well be the saviour of Aston Martin.